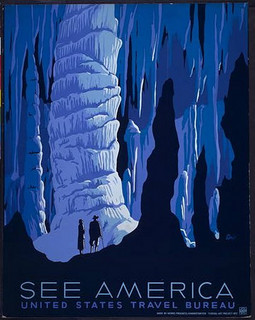 It’s summer time, and most of us can think of nothing better than to be on the road. The pull of travel has always been strong among writers, so travel literature has flourished as a genre for centuries. We are using the term “travel literature” in its broadest sense to include travelogues, memoirs, or even fiction. These works are generally produced as “literature” as opposed to current guide books to a country or region. They can approach travel from the perspective of anthropology, social history, literary criticism, or any of a number of other topics.

One of the great works about travel literature was written by Hopkins professor Larzer Ziff. His Return Passages focuses on the travel works of five great American writers including Henry James and Mark Twain. In addition to in-depth studies of a few travel writers, the library also has general works about the genre. A quick search of the catalog reveals hundreds of books, dissertations, and conference proceedings on the topic. Find out more about traveling in 17th century Japan, 20th century British travelers, and even time travel. And don’t forget to travel outside the library–there are plenty of great travel blogs to pique your interest.

Women’s travel writing presents an interesting sub-genre to explore. Travel writing often illuminates as much about the lens a writer is looking through as it does the culture they write about. Patricia M.E. Lorcin refers to this as the gaze, for example, the female gaze, the colonial gaze, etc. In the preface to her book Wayward Women: A Guide to Women Travellers, Jane Robinson tells us that “a female who travelled abroad was a strange creature in any age–although by the nineteenth century perhaps not quite as shocking as before.” While this may be true, there are many travel accounts by women before the Victorian period. Lady Mary Wortley Montagu wrote extensively about her time in Turkey as the wife of the British ambassador in the early 18th century. But the Victorian era saw a great rise in the number of women travelers who wrote about their experiences. British women traveled all over the empire and often wrote interesting accounts of their experiences.

Here’s hoping that you are traveling to some interesting place this summer. If you do, consider writing about your experience. If you can’t actually travel, do some virtual traveling through the pages of a book.