The Strange Life of the Snake According to People’s Daily 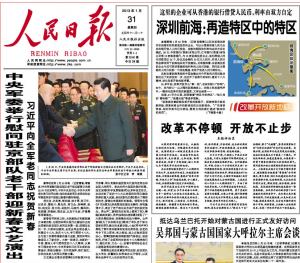 The digital edition of People’s Daily is one of the recent additions to our growing collection of Chinese language resources. What is People’s Daily? People’s Daily (Renmin ribao) is the most important daily newspaper in the People’s Republic of China. Founded in 1946, the paper has been the official organ of the Chinese Communist Party as well as the Party controlled government. Given the fact that the Chinese political system operates mostly in a dark box, People’s Daily has been a major source of information for outsiders, both foreigners and Chinese themselves, to figure out what might be going on within the inner circles of power. For example, an opinion piece in the paper might serve as an indication of what the top leaders are currently thinking about; an official editorial, on the other hand, is often a pronouncement of the leaders’ decision on some major issue facing the nation. In short, People’s Daily opens a unique window to the fascinating, sometimes bizarre world of modern Chinese politics and history. 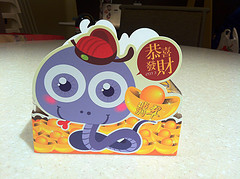 The digital edition of the paper includes the complete run of the publication, from its very first issue in 1946 to the most recent, and it is updated on a daily basis. With the Year of the Snake now upon us, why not give the database a test drive with a simple search for “snake”? While we cannot discuss all the 4,744 hits the keyword search on “snake” generates, here are a few highlights, just to show how closely intertwined the publication has been with the upheavals of modern Chinese history.

“Take no pity on the evil snake!” says People’s Daily on January 1, 1949, in a New Year editorial entitled “Carry on the revolution to the end,” written by none other than the Chinese Communist Party’s supreme leader Mao Zedong himself. The issue came out shortly after the Communist decisive victory over the Nationalists in a four-year all out Civil War (1945-1949) and on the eve of the Communist takeover of the entire country. Retelling the Aesop’s fable of “The Farmer and The Viper,” the editorial calls for no mercy for the remnant Nationalist forces (the “snake” or “viper”) and demands their complete annihilation.

The same message, “Take no pity on the evil snake,” was repeated over and over again in the following years, throughout the entire Era of High Socialism (50s, 60s, and early 70s). Only by now, the “evil snake” was no longer external enemies such as the Nationalists who had long retreated to Taiwan and presented no imminent threat, but “hidden enemies” within the Communist Party itself. For example, in the May 30, 1955 issue, an article entitled “Beating the Snake to Show Our Love of the People” compares Hu Feng, a prominent writer and scholar who voiced some criticism of the government’s policies on art and literature, to an “evil snake,” thus launching a brutal political campaign that eventually led to the imprisonment of Hu and over 2100 intellectuals nationwide. Another article, “Beating the Snakes and Filling Their Holes” (May 16, 1966), singled out Deng Tuo and Wu Han, both well known intellectuals, and called them “poisonous snakes.” Assuming the voice of a peasant woman, the author wanted “to take up the hoe, chop the poisonous snakes into pieces, and fill up their holes.”

It was not until the end of 1980s, when China finally came out of its socialist lunacy and nightmare of revolution, and embarked on modernization and reform, that the image of the snake started to soften in People’s Daily. In an issue celebrating the Chinese New Year in 1989, the year of the snake, the newspaper published an article, “Talking about snake in the year of snake” (February 9, 1989). The article retells a well known folklore/love story about a white snake who turns into a beautiful woman and marries a talented scholar. The snake, according to the article, is a symbol of modernizing China, breaking away from the “backward feudalism.”

By the next year of the snake, 2001, China had seen a decade of spectacular economic growth and was looking toward the new century with a palpable sense of confidence and optimism. Consequently, the image of the snake underwent a complete makeover in People’s Daily. In the January 6, 2001 issue, the newspaper publishes an article that gushes over the (mostly imaginary) virtues of the snake, declaring “the snake is the most intelligent among all creatures living in the wild” (citing, oddly, the story of Eve, Snake and Forbidden Fruit for evidence). No longer is the snake “evil,” “poisonous,” or even a symbol of romantic love. It is now an auspicious “golden snake” that brings China great wealth and good fortune, and “a harbinger of the mighty dragon that is 21st-century China!”