The End of the Book?

If someone said that recent technological advances made the printed book, as the conveyor 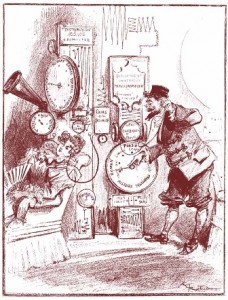 of knowledge and information, obsolete, would you think this prediction a recent one? What about a subscription service that lets you read or listen to music from your home, via an electronic device? Something recent, or ideas promulgated in the year 1894?

Everything old shall be new again. In the late 19th century, a Parisian book designer, dandy and writer wrote of “La Fin des Livres” – The End of Books – where books were replaced by a kind of subscription service, and access to both books and music was available in the home with electrical gadgets wired to a central network. Does this sound familiar?

“Each will work his pocket apparatus by a fluent current ingeniously set in action; the whole system may be kept in a simple opera-glass case, and suspended by a strap from the shoulder.”

This futuristic vision, written by Octave Uzanne and his friend Albert Robida, includes many ideas that are now an everyday reality. And although Uzanne wrote of the end of books, in fact, he was an ardent admirer of the printed book, and produced many beautiful works.

For Uzanne was a true b 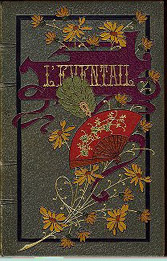 ibliophile – a lover of books. He worked closely with binders, printers, writers and artists to produce books that were truly luxury editions. Associated with the movements of Symbolism and Art Nouveau, Uzanne has sometimes been compared to William Morris; that is, someone who believed that books should be both useful AND beautiful.

The Sheridan Libraries have many books that Octave Uzanne wrote or designed. You can find them in the catalog, or ask in our new Special Collections department – the Winston Tabb Center for Research in Rare Books, Manuscripts and Archives – in the new Brody Learning Commons.