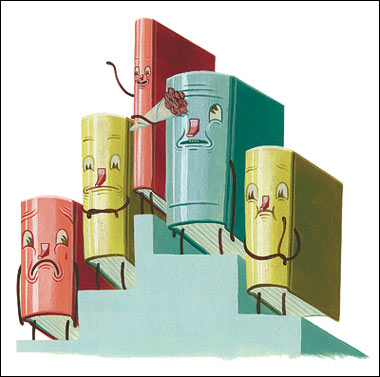 The season of literary prizes is upon us. And that favorite end-of-the-year activity – Top 10 Book Lists. We should all have lots to be thankful for: good books to read, and great gifts to buy.

The Nobel prize in literature was announced in October, and did not fail to astonish many with its choice, Herta Mueller. Following quickly on its heels was the Man Booker Prize in England, always a much-anticipated award. This year’s winner?  Hilary Mantel‘s historical novel- Wolf Hall. The Booker shortlist is always a good source for a good read.

In this country, the National Book awards will be announced this Wednesday, November 18. The short lists for fiction, nonfiction, poetry and drama are impressive.

What about books in foreign languages? In France, the Prix Goncourt and the Prix Renaudot are the 2 biggies. This year’s winners: Marie NDiaye (Trois femmes puissants) for the Goncourt, and Frédéric Beigbeder (Un roman français, on order ) for the Renaudot. In Germany, the Buchner prize is tops. And in Spain, it’s the Cervantes, which will be announced in the coming weeks. Italy’s top literary dog wins the Premio Strega this year – Tiziano Scarpa, for his novel Stabat mater (also on order).