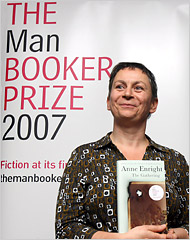 I love this time of year. It’s the season when literary awards are announced left and right. Following close on the heals of last week’s Nobel announcement, the Man Booker committee announced that their prize for fiction would be awarded to Anne Enright for her novel, “The Gathering.” Check out the New York Times review of the novel.

What a surprise! Most literary pundits (yes, there are literary pundits) were putting bets on the award going to Ian McEwan for his novel “On Chesil Beach” or to Lloyd Jones for “Mister Pip.” Other novels on the short list were “Animal’s People,” “Darkmans,” and “The Reluctant Fundamentalist.”

The Man Booker prize, Britainâ€™s foremost literary award, is given to a novel written by an author from Britain, Ireland, or the Commonwealth. The winner is awarded a check for Â£50,000 (about $102,000 USD) and a ton of publicity which inevitably translates to an increase in sales.

Strangely enough,”The Gathering” is the only Booker short list contender that MSEL doesn’t yet own. The book was only released in the US last month and we’re still waiting for our copy to arrive. It’s coming in soon, though. So check back here to see when it’s arrived. In the mean time, feel free to pick up one of the two other Enright novels we own at MSEL: “The Pleasure of Eliza Lynch” or “The Wig My Father Wore.”