Enjoy this post by Vanessa Han, one of our Special Collections Freshman Fellows for the 2022-2023 academic year!

Hello and welcome to my blog post! My name is Vanessa, and I am a freshman at Hopkins hoping to major in Sociology and International Studies and minor in History. I am also one of the Special Collections Freshman Fellows for the 2022-2023 school year, working with Sam Bessen on “Across the Burning Sands: Exploring perceptions of the Middle East through popular sheet music”. 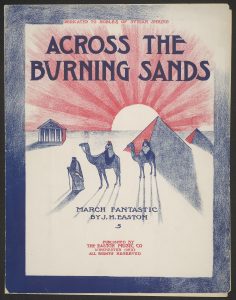 Prior to beginning my research, I was a bit anxious as I did not have much experience with the history of the Middle East or its relationship with the Western world, let alone how it was connected to sheet music. However, after doing some background reading on Egyptomania and looking through the first few sheet music covers, the worries crowding my head faded away and were instead replaced by a swirl of unanswered questions. I’m excited to share with you some of what I have learned thus far and the plethora of questions I hope to begin chipping away at as I continue this fascinating journey!

As a history buff, I get all worked up by looking at things in historical context, as well as economic, political, and many other factors that all play a role in shaping one event. So, to start out, I first looked at a few articles on Egyptomania, Orientalism, and the Middle East that Sam provided to gather some background knowledge. In general, this project can be understood through the term “orientalism”, or the perception of the East by the West. This perception can be influenced by a variety of factors, whether it’s historical events or different technological, societal, or economic inventions. For instance, one example is Egyptomania, which is the obsession with ancient Egyptian culture. The main two waves of Egyptomania ignited in response to specific historical events, the first being Napoleon’s expedition to Egypt from 1798 to 1801, and the second being the discovery of King Tut’s tomb in 1922. In the 1850s, the tourism industry really began developing, one of the first tourist destinations being Egypt.

However, Egypt was still largely inaccessible at the time to the general public due to the economic and technological context of the time. As a result, Egypt’s quality of unknownness really fueled the romanticization of Egypt. When people thought of Egypt, they conjured an image of a shimmering Nile River, its banks dotted with lush green palm trees. In the distance through the hot mirages created by the swirling dust of the desert, the distant figure of the Sphinx and pyramids can be spotted. Tales about Egypt spread with clear themes of immortality, eternal love, nostalgia, and exoticism. However, a parallel depiction was that people of Egypt or the Middle East are violent, barbaric, and uncivilized. 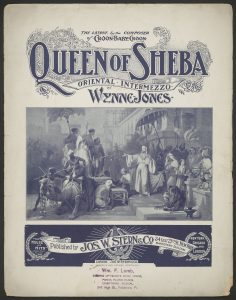 As I began looking through the sheet music covers, these themes were very apparent. For instance, this is the image displayed in one of the albums from 1902. The title of the song was “Queen of Sheba: Oriental Intermezzo”. This image was particularly fascinating. While covers up until 1908 have so far depicted people with darker skin as more frugal, the Queen of Sheba on the left side of the album is draped in expensive clothing with elaborate jewelry and an elegant staff. At the same time, the people aiding her wear minimal clothing and are shown barefoot. On the other hand, the white people on the right side are fully clothed with the light highlighting their features much more prominently. The shadows obscure and blur the left side, making it difficult to make out what is going on in the background. Furthermore, after doing some light research into the Queen of Sheba, I found she was an actual figure depicted in the Old Testament and was visited by Solomon. Based on these few pieces of information, Sam and I had many unresolved questions. For example, what is the artist trying to represent with each side of the image? Could the lyrics help us understand what is being implied? Are there historical events occurring in 1902 that inspired this imagery and music? 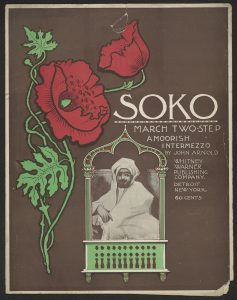 Another interesting album cover was “Soko: A Moorish Intermezzo” published in 1903. This album cover clearly demonstrates the careless melding of Middle Eastern culture by the West. Many song titles seem to arbitrarily use “Arabian”, “Oriental”, “Hindoo”, “Egyptian”, or in this case, “Moorish”, as descriptors. Creators do not seem to understand the difference between these cultures and groups, instead, depicting them as a monolith with the same people and practices. This could be further explored by analyzing the lyrics and musical composition of songs with different descriptors. For instance, do songs with the subtitle “Oriental” have different musical themes and chords than songs with the subtitle “Arabian”?

Overall, it has been fascinating to look through the collection and see the different depictions of the Middle East. I am excited to continue to learn about this subject and potentially find answers to the many questions that have been posed.

Digitized sheet music covers from The Johns Hopkins Collection of Middle-East Inspired Sheet Music can be found on Artstor and Jstor. Thanks to Lael Ensor-Bennett, Don Juedes, and the digitization team for making this resource available.