It’s the time of year when the weather cools, the leaves change, and people gather round to hear their favorite scary or odd stories. This year, the staff at JHU Museums want to share two of our favorite – and true – spooky stories that involve our two museums, Homewood Museum and Evergreen Museum & Library. Grab a treat and pull up a chair; maybe you will be able to use one of these stories at your next ghoulish gathering!

The branch of the Carroll family that owned Homewood also owned vast tracts of land across Maryland, including Poplar Island, a small island in the Chesapeake Bay that now functions as a wildlife sanctuary. In 1847, Charles Carroll of Homewood’s son, Charles Carroll of Doughoregan (1801-1862), decided to use the property to begin a potentially lucrative business. Hearing that there was a market in China for black cat fur, Carroll of Doughoregan purchased hundreds of female black cats for $0.25 a piece and relocated the cats to Poplar Island. He hired a local waterman to deliver fish to the island cats daily, but otherwise left them alone.

His plan faltered in winter, however, when the water surrounding the island froze and fish could not be delivered to the cats. Taking matters into their own hands (as cats frequently do), the cats left the island and crossed over the ice to the mainland in search of food. Charles Carroll of Doughoregan was left unlucky – and with no black cats to sell—or blame—in sight.

Where the cats ended up in Maryland remains a mystery to this day. 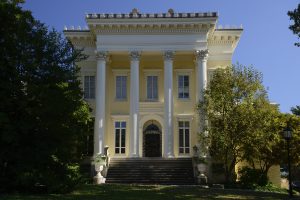 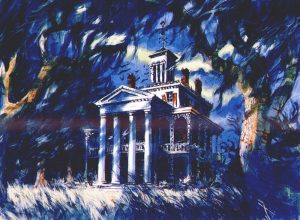 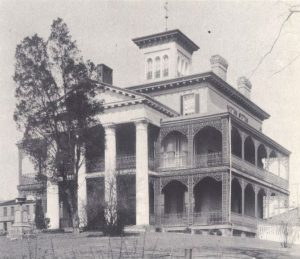 If you get a ghostly feeling when you come up the drive at Evergreen, it may be because it reminds you of a favorite Disneyland attraction! The designers of the California theme park’s Haunted Mansion, which began development as early as 1951 and finally opened in 1969, wanted the house’s design to capture an antebellum Louisiana aesthetic. They cast about for inspiration throughout the Gulf South but ultimately drew most of their inspiration for the attraction’s exterior from Baltimore.

Evergreen is one of two Baltimore houses credited with influencing the Haunted Mansion’s iconic architecture. The Shipley-Lydecker House (built in 1803, demolished in 1967) in the city’s Shipley Hill neighborhood undoubtedly was the source for much of the attraction’s unique iron details, inspired by the iron grillwork balconies added to the house after Philip Lydecker purchased it in 1906. However, the Italianate style of Evergreen and its dramatic front portico appear to have had some influence on the attraction’s design.

However, that’s where the similarities end. For the interior of the Haunted Mansion, designers took most of their inspiration from later historic houses, including the Winchester Mystery House in San Jose, California (constructed between 1884-1922).

As for whether Evergreen is truly a haunted mansion, we think it is filled more with amazing art and antiques than ghosts! But come decide for yourself, the house is open for tours by advance registration, Tuesday-Sunday, 11 a.m.-4 p.m.

For further information on the long, tortured saga of Disneyland’s Haunted Mansion, you can listen to the two part Stuff You Missed in History Class podcast here and here.