Homewood Museum tells the story of three families who lived and worked in this federal-period house between 1801 and 1832. Two of these families, the Rosses and Conners, were enslaved by the white Carroll family who owned the estate.

When visitors tour Homewood Museum they are confronted by the juxtaposition of beautiful eighteenth- and early nineteenth-century furnishings coexisting alongside the dark reality of human slavery. Homewood’s history underscores larger themes in American history about the complexity of race and labor and provides a window into how those dynamics played out in Federal-period Baltimore. For much of its history as a museum, Homewood focused on its collection of decorative arts, but in recent years, like many house museum’s in the United States, it has made telling its difficult histories the central focus of its narrative. 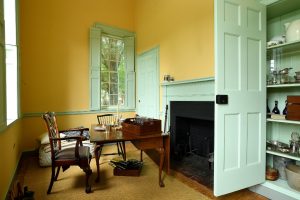 Image of Homewood Museum's Butler's Pantry, photographed by Will Kirk.

Typically during Black History month, Homewood has opened its doors for free to commemorate and honor the lives of the enslaved people who labored at the house.  While we remained closed to the public due to the pandemic, we have turned to our digital channels this February to highlight the lives of some of Homewood’s enslaved occupants and share how their stories are illuminated in the house’s period rooms.

This week, we focus on William Ross. Ross was born into slavery c.1785 in Annapolis to Bridget, an enslaved house servant owned by Charles Carroll of Homewood’s father, Charles Carroll of Carrollton (henceforth referred to as Charles Sr.). When Ross was a teenager he was sent to Homewood by Charles Sr. where he labored as a waiting man, coachman, and butler for Charles Carroll of Homewood. In 1809, Ross fled Homewood. Charles Carrollton of Homewood was so enraged by Ross’s flight to freedom that he seriously considered selling him to Georgia where he would have been separated from his family and possibly sold into plantation labor. It is unclear if Ross returned to Homewood by choice or if he was captured and returned by force, but the runaway ad Charles Carroll of Homewood placed in the Federal Gazette makes it clear that Ross would not have been able to flee easily. In any event, Ross was back at the estate several days later. Ultimately, it seems, he came back into Carroll’s favor, evidenced by an 1815 letter Carroll penned to his brother-in-law, Robert Harper, explaining his intention to eventually free William Ross and bequeath to him $100. This was a plan that never came to pass. 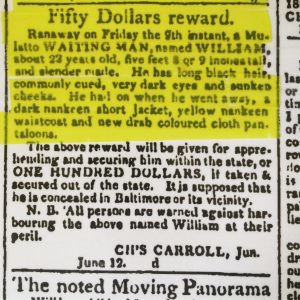 William Ross married Becky, an enslaved house servant. William and Becky had two children, Richard (b. 1812) and Mary (b. 1814), while at Homewood. The family remained together at Homewood until 1816 when Charles Carroll and his wife, Harriet, separated. Harriet returned to her native Philadelphia and took William, Becky, and their two toddlers with her. In leaving Maryland to return to Philadelphia, Harriet sought to distance herself from her abusive husband, a move that was possible due to her own wealth and social standing. By force of Pennsylvania gradual manumission law, Harriet indentured the Ross family and sold their indentures to William Shippen of Philadelphia. William labored as a servant and coachman, and Becky served as a cook and maid, both were indentured for seven years. The two Ross children were indentured to Shippen until they were each 28 years old. In the 1850 U.S. Census, William, Becky and Richard were listed as free and living in Spring Garden, Philadelphia.

Homewood’s Butler’s Pantry, pictured here, is located in the service wing of the house, and was likely a familiar space to William Ross. Given its role as a service area, the room is simply ornamented. "Old" furniture was likely used throughout Homewood’s service wing, including furniture the Carroll family would not have found fashionable enough for use in the main rooms of the house, like the work-table and the Chippendale-style chair seen here. Simple Windsor chairs or other pine furniture also would have been used in this part of the house. The installation in this rooms offers a glimpse at the type of work Ross would have done for Carroll. Seen here are two mahogany carrying cases, one for wine bottles and the other with compartments for drinking glasses. The traveling liquor case, and perhaps a foot warmer, would have been prepared by Ross for the Carrolls to use when traveling by carriage. As a waiting man, Ross was on call most hours of the day and night. He may have slept in the house on a pallet, like that shown in the corner of this room, or in Homewood’s carriage house, away from his wife and children. The table is set as if William and Becky were sitting down to a late night meal. Dwelling spaces for Homewood’s enslaved residents included outbuildings on the farm and spaces in the basement and attic of the mansion.