In honor of Black History Month, JHU Museums' curators have prepared a series of blog posts about the enslaved community at Homewood in the early 1800s. Today's post is the third post in a series of three. To read the first and second blogs in the series, click here and here.

The story of Homewood and slavery did not end when Harriet Carroll left Homewood in 1816, taking the Ross family with her to Philadelphia. Homewood remained in the hands of the Carroll family until 1838, during which time many of the individuals enslaved by Charles Carroll of Homewood were relocated to another Carroll estate, Doughoregan Manor, or, in the case of the enslaved Conners, were leased to families in New Orleans. Most, but not all, of the Conners returned to Doughoregan in 1838, and some of them survived to see Emancipation. 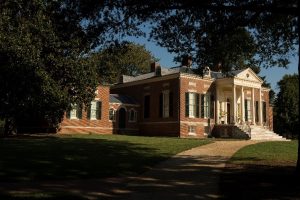 Meanwhile, Homewood was purchased in 1838 by Samuel Wyman, who owned the estate past the end of the Civil War. Although Wyman was born a Northerner, his nephew, William Keyser, claimed that from the commencement to the close of the war, Wyman "took the side of the South, asserting the justice of its cause and predicting its success.”[1] The 1850 United States Census indicated that four unnamed individuals lived at the Homewood estate, enslaved by Wyman.

Several years ago, the staff at the Johns Hopkins University Museums began research to uncover the names of the enslaved individuals who lived at Homewood, some of whose stories you have read in our previous blog posts. By paying close attention to surviving inventories of the Carrolls’ property tax records, legal proceedings, and family letters, museum researchers have been able to confirm the names of individual enslaved people at Homewood. 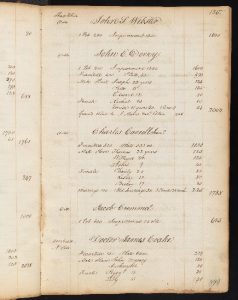 Carroll tax ledger, listing the name of some of the enslaved individuals known to have labored at Homewood.

Research, remains ongoing at Homewood. The museum’s tour currently centers the lives of several of Homewood’s enslaved residents, including William and Becky Ross, Isadod and Cis Conner, and Charity Castle but more work needs to be done to fully understand what life was like for them and the other men, women, and children who were enslaved at Homewood.

As a reminder of these lives, we conclude our final post of Black History Month with a list of recorded names of enslaved individuals who, based on research in Carroll family papers and census materials, lived and labored at Homewood between 1800 and 1833. An effort has been made to preserve family groupings. While this list likely does not include all of the individuals who lived and labored at Homewood throughout the estate’s history, we will continue our research, hoping to uncover more names in the future.