Bastille Day is coming up next week, and although the Levy Sheet Music Collection doesn’t have any songs related to the French holiday, there are at least a dozen inspired by Napoleon Bonaparte (1769-1821). 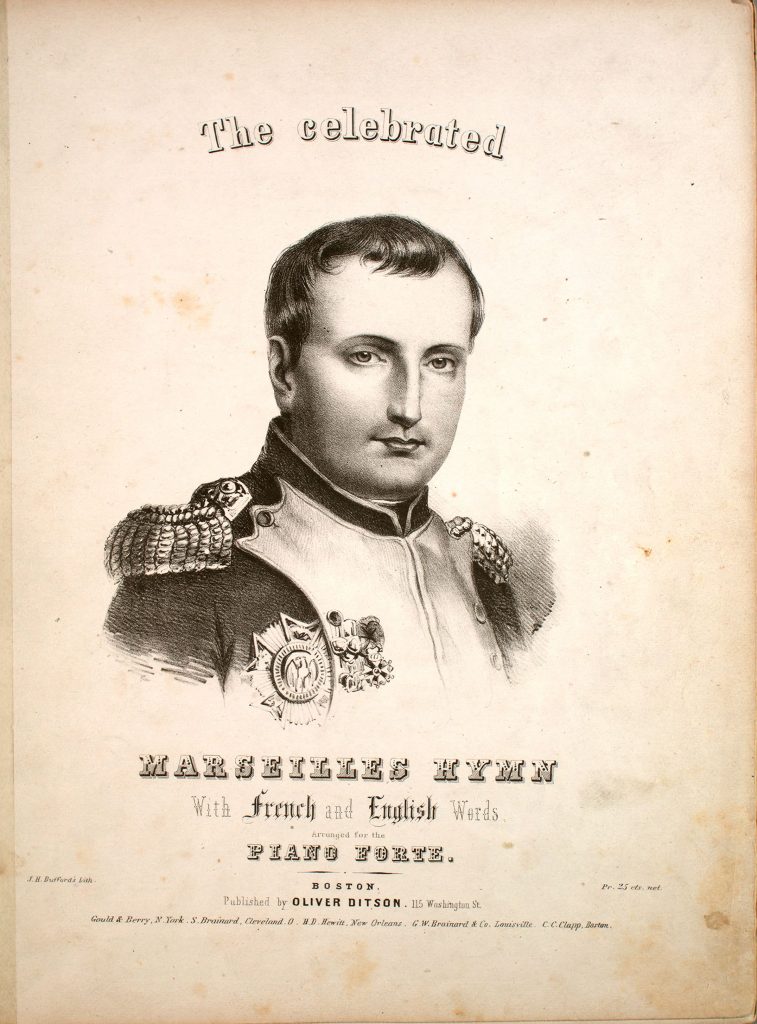 One of the earliest songs in the collection depicting Napoleon is the Marsailles Hymn, now the national anthem of France. While this version of the song (published in Boston) is undated, the original song was composed in 1792. Oliver Ditson was one of the earliest publishers in Boston, active at the address listed here (115 Washington St.) from 1844-1857. The words “new edition” printed on the first page of music imply the song had already been distributed in the United States by Ditson. This version also had distribution in New York, Cleveland, New Orleans, and Louisville. The lithograph of Napoleon here seems to be taken from Jacques-Louis David’s portrait “The Emperor Napoleon in his Study at the Tuileries,” although the ruler’s face seems to be softened slightly—almost smiling. 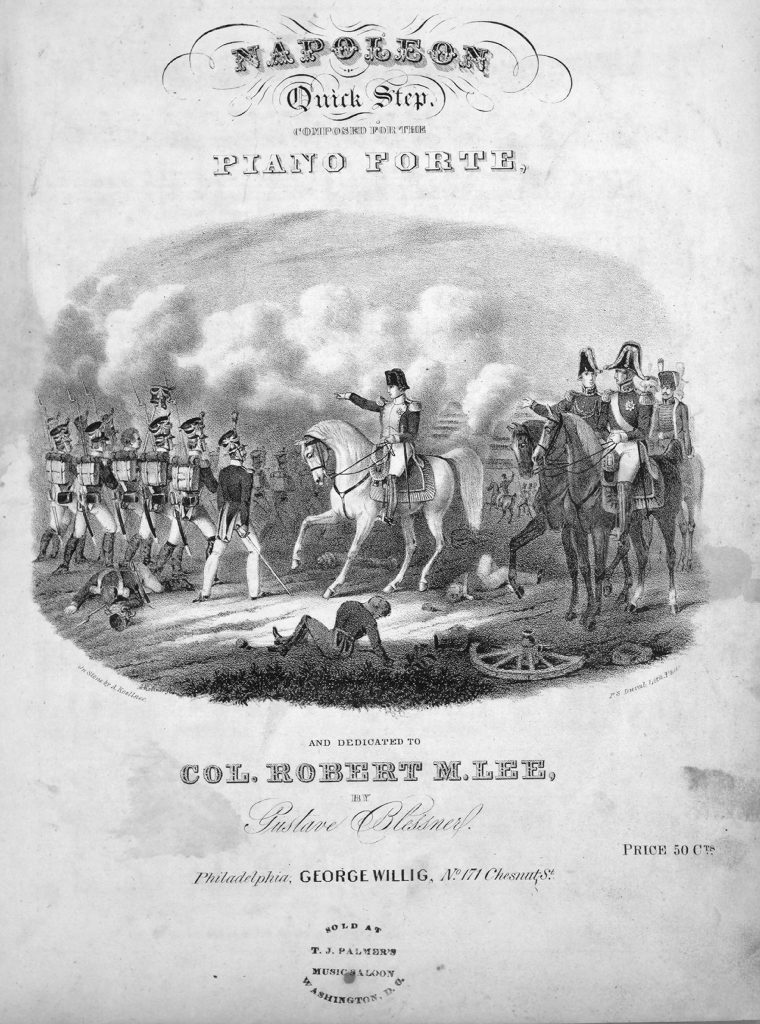 The Napoleon Quick Step was published by George Willig of Philadelphia, dedicated to Col. Robert M. Lee. While there is little information on who Lee was (there are a few articles from the 1860’s regarding financial fraud in the army), the cover appears to show one of the emperor’s battles. Napoleon had over 130 horses throughout his life, but his most famous was named Marengo. 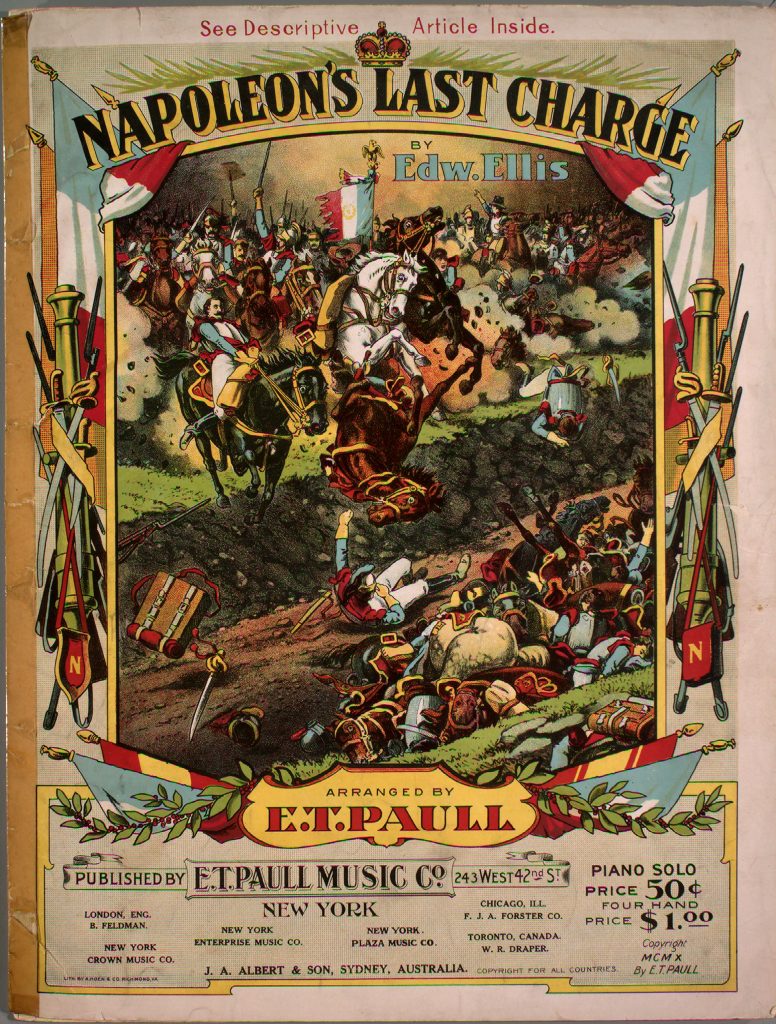 Another battle is depicted on the cover of Napoleon’s Last Charge, arranged and published by E.T. Paull in 1910. The inside of the cover has a detailed description of the battle: 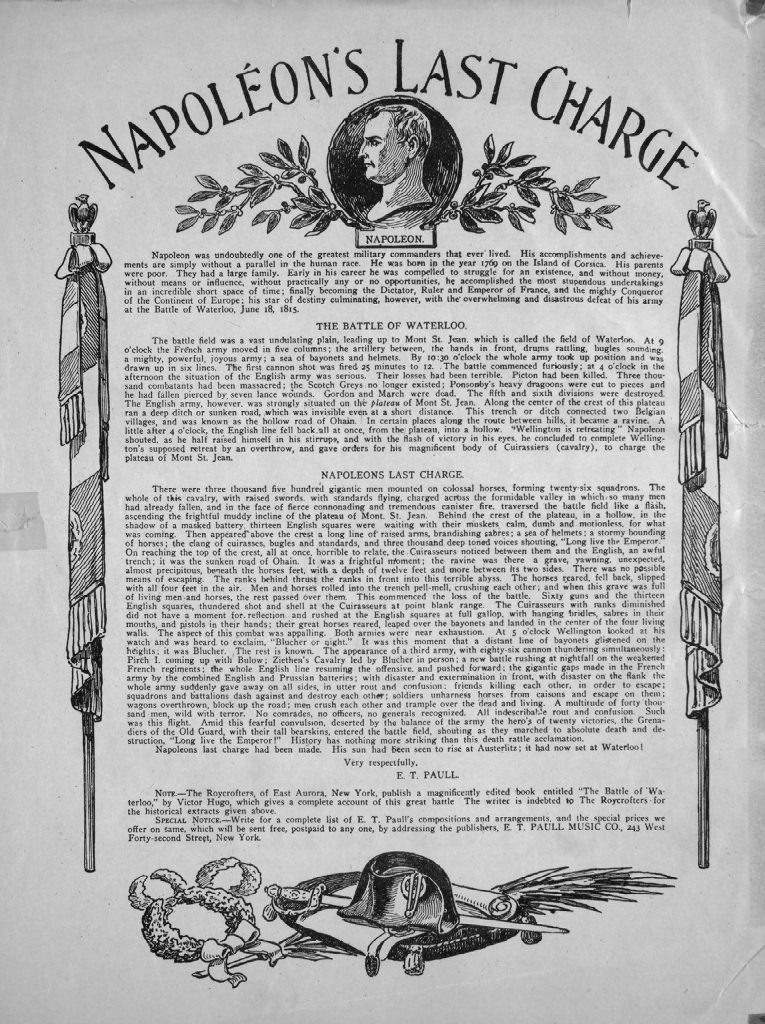 The cover is a colorful and chaotic scene, as horses and men fly forward in a cloud of smoke. The music imitates the battle, with notes to the performer above the sections: Cavalry Call, Soldiers Marching, Cannonading, Clash of Arms, and Fatal Cavalry Charge (marked furioso). This song also has historical audio from the Library of Congress National Jukebox. 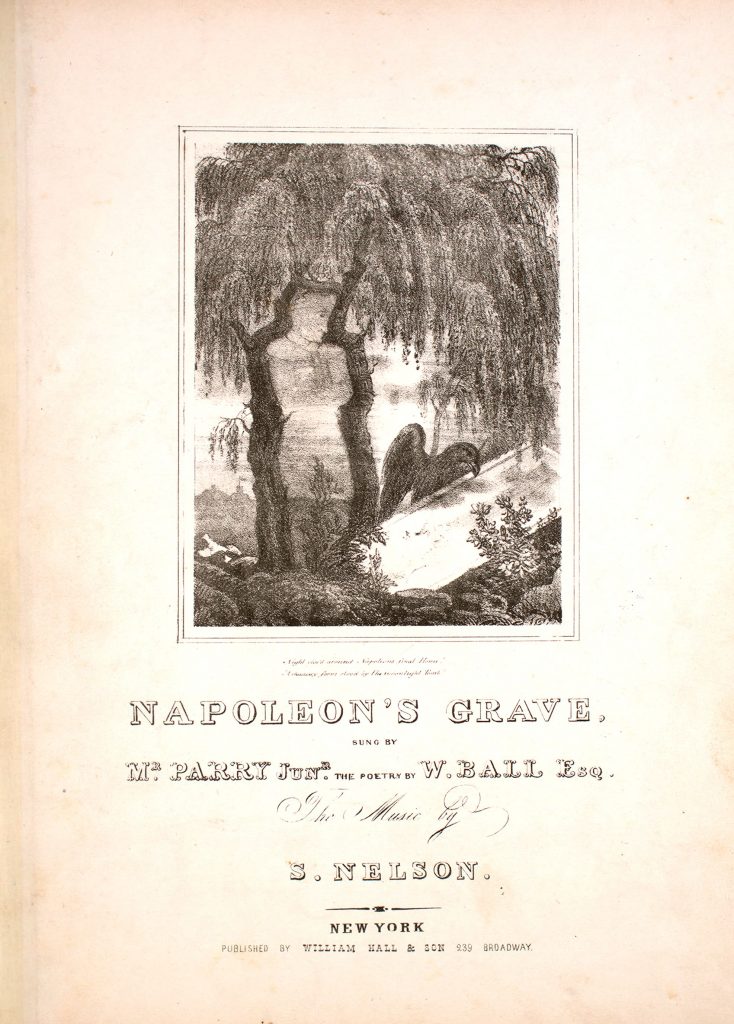 Exiled on the island of Saint Helena, Napoleon died in May 1821. He was buried on the island until 1861, when King Louis-Philippe had his remains transferred to their current home at Les Invalides. Napoleon’s Grave does not have a publishing year listed, but was likely released between 1848-1858 based on the address on the cover. The lyrics address the ghostly figure standing over the grave: “Night clos’d around Napoleon’s final home; a shadowy form stood by the moonlight tomb… Ye cares, ye fev’rish toils, how vain your proudest triumph seem, to the freed spirit, pass’d the chain of Life’s delusive dream.”