The Mystery of the Panels: Researching the Native American Collection at Evergreen Museum & Library

As part of the Johns Hopkins University Museums, Evergreen Museum & Library works closely with JHU students and recent graduates to provide opportunities to gain experience in a variety of museum roles. One of our interns, Elana Neher, is a recent graduate of the Krieger School of Arts & Sciences’  Archaeology and East Asian Studies programs. She has been working virtually but closely with Evergreen staff since June, researching the museum’s collection of Indigenous objects. We wanted to share some of her thoughts and reflections on that research with you here. – Michelle Fitzgerald, Assistant Curator, Homewood Museum and Evergreen Museum & Library

When you start researching an object, there are times that you find an object record that is completely bare bones: a title, a list of materials, a very basic description, and how/when the museum received the object (i.e. its provenance). This was the case when I started researching a set of four leather panels in Evergreen Museum & Library’s collection. I knew that they were panels; I knew their material; and I knew that they had come to the museum through a purchase of T. Harrison Garrett’s (1849-88), likely during his trip to Yellowstone in 1895. I also had a few small pictures of the panels in museum storage and some leads: the panels were presumed to be Native American, likely created by an artist from the Great Plains region, and there had been some speculation that, in the past, they were tipi liners. So, that was where I started. 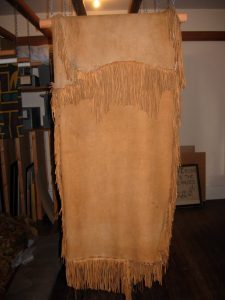 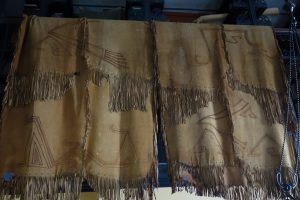 First, I looked at similar items in the collections of other museums, such as the tipi liners at the Brooklyn Museum, the American Museum of Natural History, and the National Museum of the American Indian, trying to find tipi liners that looked similar to the pictures I had of Evergreen’s panels. I also researched academic sources, and tribal sources for the function of tipi liners, their history, and their characteristics. 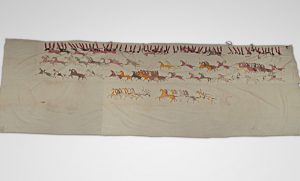 Thus, I was back to square one. I continued looking in other museums’ collections for anything that resembled Evergreen’s panels, especially their distinctive painted designs. The geometric, abstract designs on the Evergreen’s panels looked to me like they could be some kind of symbol or an abstracted representation of a physical object. Even with this in mind, I came up with few leads. I then decided to contact museum professionals and experts from various institutions to find out if they had seen these specific designs before. Sadly, no one had. 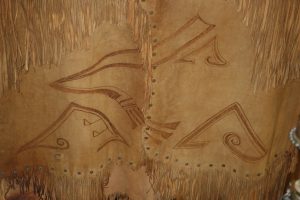 At this point, I began to suspect another possibility: that these panels were made by Native American artists to be souvenirs for tourists, not tipi liners or panels used by the people who created them. My suspicions led me down a fascinating avenue of research.

Tourist objects tell a special story, a story of two (or more) cultures interacting. During the early twentieth century, wealthy East Coast elites in the United States were fascinated with the West for its promise of epic views and experiences. Travelers’ demand for specific souvenirs drove Native American artists to create specific forms of art that appealed to tourists’ tastes and to adapt their art to the lifestyles of their Euro-American buyers, rather than for Native lifestyles. (On the other hand, the Lakota artists who Garrett likely interacted with did not fit this pattern and were praised for creating one-of-a-kind, “traditional” works that primarily used traditional motifs and designs.) In earlier scholarship, tourist art was looked down upon and ignored because it was considered “inauthentic” as it was influenced by Euro-Americans and not purely Native American. Today, we understand that tourist art is no less authentic than any other Native American art and that the unique story it reflects is invaluable to understanding these cross-cultural interactions. Today, some Native American artists continue to create tourist art. This practice continues artistic traditions and supports the artist’s financial survival, similar to the motivations for creating souvenirs and selling them in museum gift shops, like Evergreen’s.

Despite extensive research, I am still not certain of the exact origin and purpose of these panels, though it is possible that they are, in fact, souvenir art and not actual panels as Evergreen museum curators may have assumed in the past. I was able to uncover the interesting and important story of Euro-American and Native American interaction through tourist art even without knowing every detail about the panels. But my search is not over. I am still looking out for anything that looks like these four fascinating panels as I continue my research on Native American objects in Evergreen’s collection.