Today’s post is by Sophia Lola, Class of 2022, a Writing Seminars major.

When I was younger, I used to take out stacks upon stacks of books from my public library. I loved the feel of a book in my hands, and I would leave my own little physical mark on it by dog-earring the pages to mark the spot I left off at. (Sorry, librarians!) I often wondered who had checked the book out before me, who would take it out after I returned it, who currently had another copy of the book. When I went to flea markets with my parents, I loved finding old books, seeing how worn the pages were, looking at handwritten inscriptions and notes just inside the cover or in the margins of the pages, and knowing the book had passed through other hands. To me, the questions of “Who else has read this? How many people has this book had an impact on?” have always been some of the most fascinating aspects of a book to think about, contributing to the story of the book almost as much the content itself.

So when I came across a Google Books digital surrogate (essentially an online scan of a printed copy, rather than just a webpage with the book’s text) of an interesting copy of Louisa May Alcott’s Hospital Sketches, I was quite excited to look at it and learn more about the book itself, beyond the story contained in its pages. Hospital Sketches was originally published in 1863 and follows the story of a Civil War nurse, Tribulations Periwinkle, as she first enters work in a hospital. The chapter “A Day” was one of my favorite readings from class, but I had read it in a non-surrogate e-book form. It gave me no sense of the book’s history—how old it was or who read it—because it was just text on a webpage, not a physical, storied object. It is well known that one of Alcott’s other works, Little Women, has been reprinted and adapted into film many times over; it’s been immensely popular and widely read ever since it was first published, so the fact that it has a history of reception seems almost obvious. Hospital Sketches, however, never seems to have reached that level of popularity. As a way to begin to understand its readership and printing history, a particular digital surrogate provides a lot of information in a very compact form, especially as it pertains to the book’s circulation in one specific community, at the University of Illinois at Urbana-Champaign. 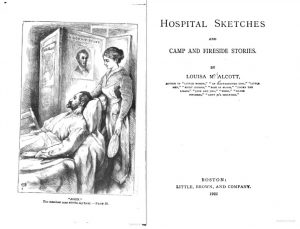 The first few pages of this particular copy, before the story itself begins, offer immediate insights. The title page shows that it was published by Little, Brown, and Company in 1922, almost six decades after it was originally published. This date indicates that there was enough general interest in the book for there to be at least two editions (in fact, the book was republished many times in the intervening years, as we can see from digitized copies at HathiTrust), and that its popularity was fairly deep and durable, since this edition came out long after the book’s initial hype would have died down. Perhaps the early ’20s, after World War I and the passage of the 19th Amendment, served as a time of renewed interest in Hospital Sketches or in Alcott more generally, as a pioneering woman writer. In any case, something about the book was still appealing enough to spur this edition. 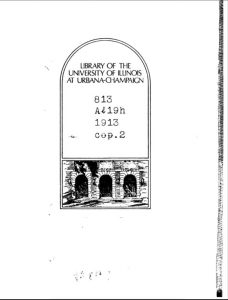 The inside cover of the book bears a logo and stamp from the University of Illinois. It says, “Cop. 2,” which presumably is short for “copy 2.” The library staff, then, must have thought the book would be popular enough with college students or maybe assigned in literature classes often enough that they should have at least two copies. The fact that this copy belongs to a university in the first place allows us to infer who the target audience of the book may have been: young people and college students, who would perhaps read it for enjoyment or because a professor thought it was pertinent to their studies. 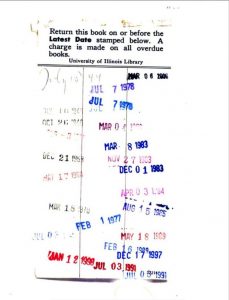 Looking at the check-out date stamps a couple of pages further on, it appears that this copy was checked out almost thirty times, beginning in 1944. Perhaps an earlier page of check-out stamps has been obliterated, with dates between 1922 and 1944, or perhaps the library acquired this copy in the early 1940s, when another war might prompted renewed interest in the book. This copy’s popularity seems to have peaked in 1983, with four stamps that year. And the latest date stamped on it is from what looks like 2006—showing fairly recent interest in it. Also, the Google Books page for this copy says it was digitized only a few years ago, in 2015. I would guess that the University of Illinois did not just indiscriminately digitize their entire collection, so the choice to digitize this book (and to make it free, which is great for accessibility!) was most likely made because they thought it would be popular and important in this current age.

That’s a lot of history for just one copy of a book out of what must have been thousands published throughout the past century and a half. Looking at just this one digitized version of a printed book that belonged to one community, we get a little glimpse into the life of the book, and we can also infer what its impact would have been more widely, outside of the University of Illinois. We see fairly steady and often renewed interest in the book, and we can infer that it has had a deep and long impact on readers and literary culture in general, which helps to reinforce Louisa May Alcott’s status as a literary powerhouse even beyond the iconic Little Women.