Scribbling Women: Ida B. Wells, the “Princess of the Press”

Today’s post is by Addy Perlman, Class of 2021, a Writing Seminars major. 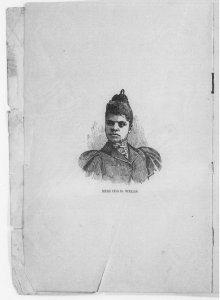 Frontispiece portrait of Ida B. Wells from A Red Record, [1892/1894]. Image from Library of Congress.

Journalist Ida Bell Wells-Barnett used her pen to battle injustice. She was born on July 16, 1862 to James and Lizzie Wells, who were enslaved in Holly Springs, Mississippi. After the Civil War, her father helped found Shaw University (now Rust College). Wells went to Rust College for part of her education, but yellow fever left her orphaned, and she assumed the role of her siblings’ guardian. Having to care for her siblings as if they were her own children, she “convinced a nearby country school administrator that she was 18, and landed a job as a teacher” before she and her siblings moved to Memphis, Tennessee, where their aunt would care for them (“Ida B. Wells”). Evidently, even at a young age, Wells was able to see and understand problems and then address them.

As an African American woman, Wells experienced and fought back against the Black codes and “Jim Crow” throughout her life. In 1883, while riding the train from Memphis to Woodstock, Tennessee, where she taught school, she was forced to re-locate to the smoking car, where African American passengers were required to ride, even though she had purchased a first-class ticket. The following year, she sued the railroad. She saw a moment of success when she won her case, but the Tennessee Supreme Court overturned the ruling made by the circuit court. After facing this level of racial injustice, Wells chose the pen name “Iola” and started to write; her writing led to her co-ownership, in 1889, of The Memphis Free Speech and Headlight, a newspaper in which she also continued to publish her work. Her attention turned to the horrendous lynchings in the South because of three men in Memphis: Tom Moss, Calvin McDowell, and Will Stewart. The three men had opened a grocery store, which competed with a white-owned store in the neighborhood. The white store-owner sought revenge and a violent clash ensued. The Black store-owners were arrested and hauled off to jail. A few days later, they were taken from jail and shot by a mob of masked men. It was this 1892 incident that prompted Wells, who was friends with Moss, to launch her most important work as an investigative journalist.

Wells initially published a series of anti-lynching editorials in her newspaper. Then, traveling throughout the South, Wells conducted interviews and dug up records on other lynchings. She learned that, often, “lynch victims had challenged white authority or had successfully competed with whites in business or politics” (Steptoe). She particularly wanted to unveil the “stereotype that was often used to justify lynchings—that black men were rapists. Instead, she found that in two-thirds of mob murders, rape was never an accusation. And she often found evidence of what had actually been a consensual interracial relationship” (Dickerson). She compiled her research into Southern Horrors: Lynch Law in All Its Phases, which was published in 1892 as a pamphlet, and continued her analysis in A Red Record: Tabulated Statistics and Alleged Causes of Lynching in the United States, a pamphlet published a few years later.

Cover of Ida B. Wells, “A Red Record.” Chicago, [1894]. Image from the Schomburg Center for Research in Black Culture, New York Public Library.

Wells’ anti-lynching journalism, characterized by empirical evidence, impassioned prose, and myth-busting discoveries, earned her the nick-name “The Princess of the Press” (Dickerson). As she wrote in her preface to Southern Horrors, “Somebody must show that the Afro-American race is more sinned against than sinning, and it seems to have fallen upon me to do so”—and she did, despite great personal sacrifices. After publishing her anti-lynching pieces in her own newspaper, for example, Wells “was run out of the South—her newspaper ransacked, and her life threatened” (Dickerson). Nevertheless, she procured a sliver of justice for the victims of lynching by recording these abominable crimes.

A complete scan available at the Library of Congress. https://www.loc.gov/item/mfd.40021/ 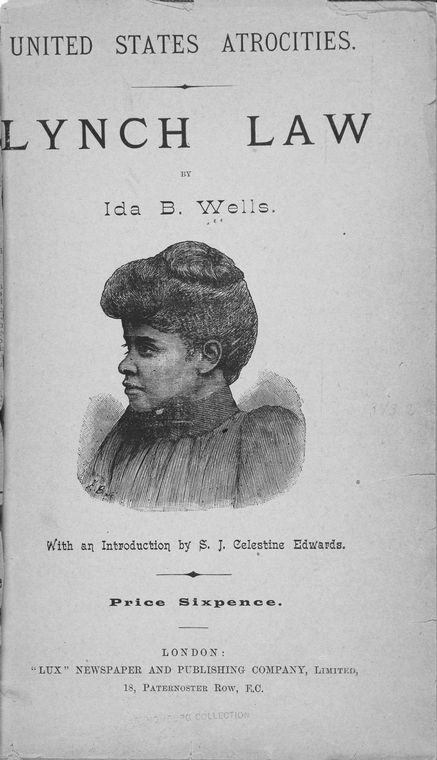 —–. Southern Horrors: Lynch Law in All Its Phases. Adansonia Press, [2018]. Print and digital.

Wells-Barnett, Ida B. Crusade for Justice: The Autobiography of Ida B. Wells. Edited by Alfreda M. Duster. Chicago: University of Chicago Press, 1970. Print.

——. The Reason Why the Colored American Is Not In the World’s Columbian Exposition. Chicago, [1893].

E-book available at A Celebration of Woman Writers. https://digital.library.upenn.edu/women/wells/exposition/exposition.html#

Guide to the Ida B. Wells Papers 1884-1976. University of Chicago Library.  https://www.lib.uchicago.edu/e/scrc/findingaids/view.php?eadid=ICU.SPCL.IBWELLS.