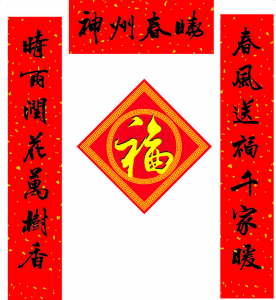 The celebration of spring has started despite the fact that groundhog Phil predicted another six weeks of winter. February 4 (lichun, spring begins), the first of the 24 solar terms in the traditional East Asian lunisolar calendars, marked the beginning of the spring.  This week, many Asians all over the world are celebrating the Chinese New Year, also call Spring Festival, which falls on February 16 this year.

The traditional celebration begins on the eve of the Spring Festival, characterized by family gatherings, good food, and hopes for a better new year.  It is a traditional practice to light fireworks and firecrackers around midnight to chase off the evil spirits as encapsulated by evil beast Nián of which the term guònián was derived.

It is said that in ancient times there lived a ferocious, violent, single-horned beast called Nian.  It spent most of the year in the deep ocean, but at the end of lunar year, it came out to the villages, destroyed all the crops, and swallowed people and other living things whole. Running away or hiding did not solve the problem, and Nian came back every year and caused much harm.  When people finally gathered together to fight using loud fireworks, drums, and red color,  the beast Nian was scared away and never come back.  Since then people started to post red Chinese spring couplet on the door, hang red lanterns, and set off  firecrackers on Spring Festival Eve. [1]

There are various versions of the story.  Here are two for your entertainment: Story about Nian (in Chinese) and Story of Nian (in English). 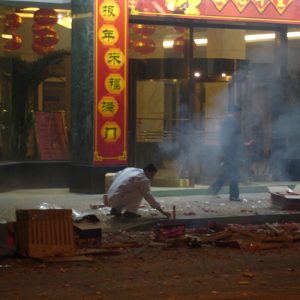 Nowadays, fireworks are no longer used to fight evil spirit, but more used in entertainment and celebration events.   I still remember the excitement I had in childhood when setting off the fireworks.   With the new technology, fireworks have been replaced or accompanied by drones shows for entertainment. A few examples are the  2017 Fortune Global Forum in Guang Zhou and the most recent Winter Olympics opening ceremony.

During the week long celebration, family and friends pay visits to each other, send new year’s good wishes and gifts. Kids receive red envelopes with “lucky money” on the morning of the new year. In China, the celebration continues till the Lantern Festival on March 2nd, the 15th day of the first lunar month. Overall, it is a time of family, food, and fun!

To be part of the celebration, Here are a few local events:

Another spring festival is the Holi (Hindu Spring Festival), the festival of love, on March 2.  The Holi festival celebrate the beginning of the spring and the victory of good over evil.  There is a story behind Holi festival: the arrogant king Hiranyakashipu tries to kill his son Prahlada, who is devoted to Hindu god Vishnu instead of him. Despite of Hiranyakashipu’s multiple attempts, Prahlada remain unhurt. In the end Hiranyakashipu was killed by Narasimha, an avatar of Vishnu. Click here to view the full story.  Holi Festival is an occasion to have fun and good food with family and friends, to reset and renew ruptured relationships, end conflicts and rid themselves of accumulated emotional impurities from the past.[2] . To experience the festival, save the date for Holi DC – May 6th 2018.

How do you celebrate spring?  We would love to hear your stories and culture.

As winter ends and spring starts, may your hearts filled with the warmth of love, and Wishing you happiness, longevity, and prosperity!!!

One thought on “Happy Spring Festival!”