Spirits of the Dead: The End of Enigmatic Edgar – February 5, 4pm 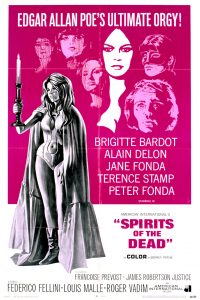 Don your black turtlenecks and come hungry for popcorn to Spirits of the Dead, a trilogy of short film adaptations of tales by Edgar Allan Poe showing at the George Peabody Library on Sunday, February 5, at 4 pm.

The screening, which is free and open to the public, closes out The Enigmatic Edgar A. Poe in Baltimore & Beyond: Selections from the Susan Jaffe Tane, our exhibition of rare artifacts, manuscripts, newspapers, photographs, and you-name-it by and about Edgar Allan Poe. If you haven’t seen the exhibition yet, we are open through Sunday—and that’s your last chance!

The three short films that make up Spirits of the Dead were directed by three great cinematic auteurs, Louis Malle, Roger Vadim, and Federico Fellini. So it’s also a wonderful occasion for comparing directorial styles and approaches. But you’ll probably notice at least one thing they have in common: taking liberties with the Poe texts they are adapting. (Liberties that are very, shall we say, libertine, à la 1968.)

There’s a long and luscious history of Poe adaptations in all kinds of media, from illustrations and musical settings of his poetry, to comic book versions of his tales, to films and television shows and action figures and video games that incorporate Poe-esque characters. One of the earliest Poe films ever made—going back to the early days of film history itself—is The Raven (1909), directed by D. W. Griffith (who also directed the racist epic Birth of a Nation). The “kitsch” version of Poe that we know and love today was the progeny of director Roger Corman, who made eight film adaptations of Poe works between 1959 and 1964, including House of Usher (1960), The Pit and the Pendulum (1961), Tales of Terror (1962), and The Raven (1963). Most of these starred Vincent Price.

But there has been a French love affair with Poe that goes back even further. French translations of Poe’s works—translations are, of course, a kind of adaptation—first appeared in 1853, just four years after Poe’s death; the poet Charles Baudelaire was one of the most prolific translators of Poe, titling several of his collections Histories Extraordinaires—which also served as the original French title for Spirits of the Dead. French film adaptations of Poe include La Chute de la Maison Usher (1928) and Danse Macabre (1964).

We have so many ways for you to learn about adaptations of Poe! Check out Adapting Poe: Re-Imaginings in Popular Culture, Poe in the Media: Screen, Songs, and Spoken Word Recordings, Poe Evermore: The Legacy in Film, Music and Television (available through Borrow Direct), and of course Poe-focused journals like Poe Studies, Dark Romanticism, and The Edgar Allan Poe Review. We even made our own Poe adaptation to celebrate the anniversary of Poe’s death back in October—a Hopkins version of “The Raven.”

Or, just come to the movie on Sunday. Eat some popcorn. Laugh. Relax. And say good-bye to Enigmatic Edgar.