Edgar Allan Poe’s death in Baltimore on October 7, 1849, ensured that the writer and the city would be forever linked. On October 7, 2016, come celebrate Poe’s life and legacy, and commemorate the anniversary of his death, at the George Peabody Library in Mt. Vernon. We’ll be screening The Raven, a film that reimagines Poe’s last days by putting him in pursuit of a serial killer who is copying the murders in his own tales. Showtime is 7 pm; this event is free and open to the public. 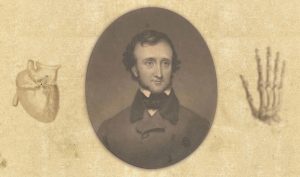 We’ll have the perfect spooky ambiance for our viewing: an exhibition of rare Poe materials. The Enigmatic Edgar A. Poe in Baltimore & Beyond features highlights from the Susan Jaffe Tane Collection of Edgar Allan Poe, one of the finest private collections of Poe materials in the world. Fragment of Poe’s coffin? Check. Lock of his hair, snipped at his demise? Check. Poe action figure? Check. And what else, you ask? How about:

Plus many nineteenth-century editions of Poe’s works, beautiful illustrations, and contemporary homages.

While he is best known for his horror stories and the eerie poem “The Raven,” Edgar Allan Poe was actually a tireless experimenter. He is credited with inventing the literary genres of science fiction and detective fiction. He was an exacting literary critic and a prolific book reviewer. He wrote a book about mollusks (or… plagiarized it, depending on your point of view) and another in which he anticipated several key cosmological tenets. He published a story about hypnotizing a dead man that was republished as a factual account. Enigmatic Edgar takes you far beyond the Poe you already know.

For more about the exhibition and additional film screenings, stay tuned to #EnigmaticEdgar.