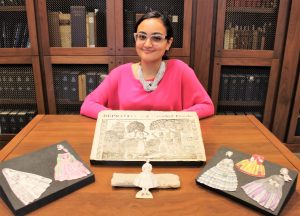 Before I begin, let me first introduce myself: I’m Kiana Boroumand, a current freshman intending to major in sociology and writing seminars and minor in the study of women, gender, and sexuality. I’m a Baltimore native, a feminist to the core, and, as of the past few months, a Freshman Fellow – which means that I’m lucky enough to do independent research in Special Collections and Archives.
Since Hopkins has an extensive collection of books from the nineteenth century, I immediately knew I wanted my research to be centered around the feminist movement. It was the nineteenth century, after all, that gave rise to the first wave of feminism—so, as far as research goes, there was no better place to start.

Some paper dolls from the nineteenth century! 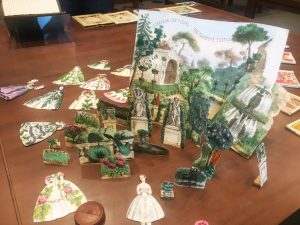 For the past few months, I’ve been studying everything from paper dolls (some of which are pictured above) to broadsides, etiquette books to medical texts, trying to learn as much as I could about the genesis of the feminist movement and what it sought to achieve. There is so much depth and breadth of material to study, and it’s been overwhelming at times to narrow down a topic, but, as first semester begins to come to a close, I can report that I’ve finally, officially settled on my area of research: dress reform.

To give you some background, the dress reform movement began in the nineteenth century to combat the harmful, restrictive clothing women had to wear—including a range of undergarments from chemises and petticoats to hoops, bustles, and corsets. One of the books I’ve been studying, The World’s Congress of Representative Women (1894), includes transcripts of various speeches given by feminist advocates at the congress from which the book derives its title. Many of these speeches deal exclusively with the topic of dress reform, and I’ve included some particularly poignant quotes from them below.

From “The Ethics of Dress” by Alice Timmons Toomy

“The baby girl resists restrictions, but centuries of inherited submission to conventionalities and limitations of sphere, bring the tiny girl readily into the bondage of ‘what people will think’; so that before the little girl of the privileged class is five years old she has accepted proprieties and restrictions as sacred as law in which, alas! Nature and comfort play very little part” (340).

“How limited must be the employment, how restricted the pleasures, of one who wears this modern costume!” (357).
“She expects to take the same course of study that a man does; to hold her own in a profession, to assume a business role. These things she attempts while handicapped by a dress imposed upon her during the dark ages. Professor Lester F. Ward, author of Dynamic Sociology, sums up the whole matter when he declares that ‘the dress of women is the disgrace of civilization’” (358).

As the passages above illustrate, the restrictive clothes women had to wear weren’t just harmful to their health, they were also intentionally designed to propagate the cult of domesticity and keep women at home.

Ultimately, I’m working on tracking the progression of dress and style throughout the different waves of feminism. During the second wave, for instance, there was a surge of female fashion designers within the industry, from the iconic Coco Chanel – who revolutionized women’s fashion by designing pantsuits – to punk designers like Betsey Johnson. Now, well into feminism’s third wave, it’s easy to point to the progress we’ve made in terms of fashion, but a closer look reveals that there’s still a long way to go. Style trends such as waist-training and the resurgence of the corset as a fashion look (i.e. wearing a corset over a t-shirt) seem to be regressive of the feminist cause, and, as sociologist Judith Butler writes in her essay, “Performative Acts and Gender Constitution: An Essay in Phenomenology and Feminist Theory,” clothing continues to play an important – and perhaps too important – part in “doing gender.”

As I continue my research, I hope to delve deeper into the intersections of fashion, gender, and politics. After all, the personal is political—and what’s more personal (and political!) than our own bodies?

One thought on “Meet Our Freshman Fellows: Kiana Boroumand on Dress Reform”