Commencement through the Years 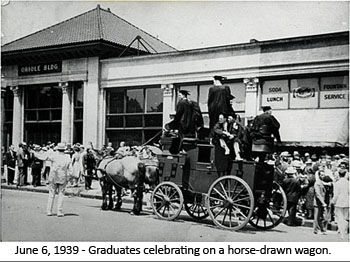 The Johns Hopkins University conferred its first degrees in 1878, two years after our founding (four PhDs). The first undergraduate degrees were conferred in 1879 (three BAs). However, until 1884, there were no Commencement exercises, and it was not until 1886 that diplomas were awarded to graduates. According to John C. French, in A History of the University Founded by Johns Hopkins, the first diplomas were “phrased quite simply in English, and bearing the official seal.” 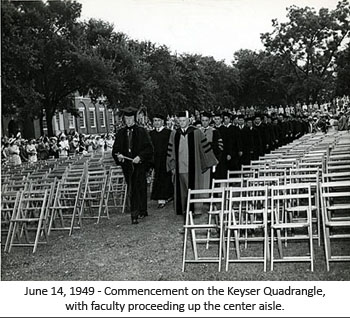 In 1944, due to the ongoing world war, Commencement was held on July 3, but this marks the first time that Commencement took place on the Homewood Campus, in front of Gilman Hall, using the steps and terrace as a stage. For many years, this event took place open to the elements, but in the 1970s, the University began erecting a tent, covering most of the quad, and this practice continued through 2000.

Due to a major landscaping project that began in summer 2000, a tent was no longer feasible, due to irrigation pipes. It was decided to move Commencement to Homewood Field in 2001. Many graduates have fond memories of attending Commencement among the academic buildings, but the seating at Homewood Field accommodates more people and gives a better field of view to those watching their friends and family graduate.