What are we commemorating on Commemoration Day? 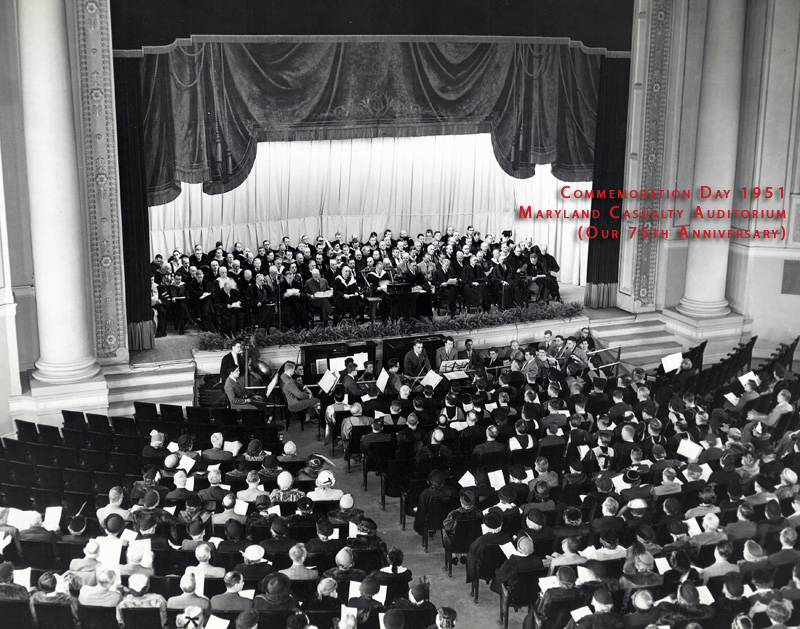 On February 22, 1876, Daniel Coit Gilman was formally inaugurated as the first President of The Johns Hopkins University. It was a matter of solemn ceremony, with addresses from Harvard President Charles Eliot, as well as from Gilman himself. Gilman’s Inaugural Address has been published and re-published over the years, and remains a monument to the man who established Hopkins and set us on a unique path. Johns Hopkins was the first research university, where students learn by doing research and having it evaluated by their peers and instructors, rather than simply listening to lectures and repeating them on an exam.

That first ceremony was held at a nearby auditorium, the Academy of Music, because there was no facility on campus large enough to house everyone. Until 1916, the Arts and Sciences campus was located downtown, in the area of Howard, Monument, Eutaw and Centre streets. Even after moving to Homewood, there was no auditorium on campus until Shriver Hall was completed in 1954, so off-campus facilities were used for all such events until that time.

A year after President Gilman’s inaugural, the Trustees announced that, henceforth, February 22 would be considered the anniversary of the founding of this University, and would be celebrated with pomp and ceremony. For many decades, and especially on major anniversaries, this practice was followed faithfully. In terms of formality, it resembled Commencement, with a principal speaker, honorary degrees conferred, and the faculty and administration in full academic regalia.

The formal ceremony continued through the 1980s, often with a visiting head-of-state as the speaker. By the 1990s, however, the old tradition was showing its age. It was more expensive to put on such a ceremony, and required more work given the larger crowds and the number of dignitaries to be accommodated. In the 1990s, facing financial crises, Hopkins decided that such formal occasions would be celebrated only every five years. Soon after, however, the ceremony disappeared entirely, and no anniversary celebration of any kind was held for a number of years.

In the early 2000s, Vice Provost and Dean of Undergraduate Education Paula Burger began reviving Commemoration Day, coinciding with an emphasis on resurrecting old traditions and creating new ones to foster a sense of community among our students. Instead of a formal academic convocation, Dean Burger set up activities that would be of more interest to students. Beginning with a Hopkins History trivia contest, the celebration evolved into free cake in the Glass Pavilion and a display of photographs depicting people, places, events and activities in our history.

We hope you will take some time to view and participate in this year’s celebration, which continues and enlarges our anniversary celebration. Please join us in the Glass Pavilion on today from 12:00 noon – 2:00 p.m. for cake and a display of historical photographs. Hopkins Retrospective Program Manager Jenny Kinniff and I will be there and we look forward to seeing you. This year, by the way, marks our 139th birthday.