How the N.A.G. Blue Jay Came to Be

Editor’s note: Stop by the Special Collections Reading Room on M-level of the Brody Learning Commons for an exhibit dedicated to the Blue Jay as we welcome alumni back to campus for Reunion Weekend.

As a freshman in the fall of 1965, I was eager to draw political cartoons for the News-Letter.  I met with the editors, Caleb Deschanel and Jim Freedman. They seemed happy to have me join the staff, and within a few weeks, I had my first cartoon published.

Initially I drew cartoons about national and international events, but one day Caleb — later to be an acclaimed, Academy Award-nominated cinematographer (and father of actresses Zooey and Emily Deschanel) — told me that the News-Letter had no objection to these drawings, “but they really have nothing to do with what’s going on around the campus.”  Could I create a cartoon Blue Jay who would comment about campus issues?  Thus my cartoon version of the Blue Jay was born. 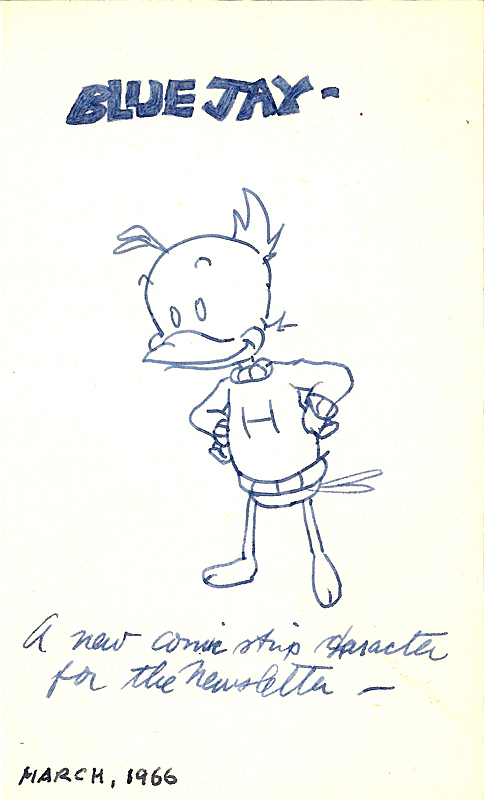 His first appearance was on March 26, 1966. He complained about the bookstore’s high prices.

He later made snide remarks about the physical appearance of alumni showing up for Homecoming, the terrible parking problem around the campus, and urban crime. The French have an expression for this – which even non-French speakers know: The more things change, the more they stay the same (plus ça change, plus c’est la même chose).

It was natural that I also began using the Blue Jay in sports cartoons. The sports editor had a regular column, “The Jay’s Nest,” for which I drew a heading that showed the Blue Jay pounding away on a typewriter, wearing a battered fedora, a’la every reporter in old movies; and I also began drawing cartoons of the Blue Jay doing severe bodily damage to the mascots of opposing lacrosse teams.

I found out some years later that legendary lacrosse coach Bob Scott would post these cartoons in the team’s locker room. After Scotty retired in 1974, his successor, Henry Ciccarone, called me and asked for a fresh set of game-day cartoons, since the ones Scotty had used were yellowed and full of thumbtack holes. Every year since, through the coaching tenures of Chic, Don Zimmerman, Tony Seaman, John Haus, and now Dave Pietramala, I have done a set of fresh game-day cartoons for them to use for amusing – and perhaps inspiring – the team. I also draw a personalized Blue Jay for each senior, with the player’s number on the Jay’s jersey.

Although primarily associated with Hopkins lacrosse, my Blue Jay has had a multi-sports career. I’ve drawn him playing basketball and football, swimming, wrestling, and running track.

Henry Ciccarone was the first Hopkins coach to put my Blue Jay on T-shirts, hats, bumper stickers, and the like. Every lacrosse coach since has given team members apparel featuring my Blue Jay – and quite a few players have had it tattooed on them.

Sometimes plus ça change, plus c’est la même chose isn’t so bad after all.

One thought on “How the N.A.G. Blue Jay Came to Be”