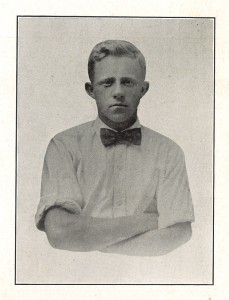 I’m willing to bet that very few reading this have ever heard of Robert Layfield. There are no buildings named for him and no monument to his accomplishments. He wasn’t wealthy, he made no mark in academia, and he died at the age of eighteen, during his freshman year at Johns Hopkins. But he holds a sad distinction that no other student would wish to claim. Robert Layfield remains the only Hopkins athlete to die as a result of injuries sustained during competition.

On Saturday, October 31, 1914, the Johns Hopkins football team was playing Lehigh, in Bethlehem, PA. It was the fourth game of the season and Hopkins was 2-1. Although a freshman, Layfield was in the starting lineup, a 125-pound quarterback. In those days, players worked both sides of the ball, and Layfield was no exception. Lehigh had the ball, driving toward the Hopkins goal, and the Lehigh halfback had just one man to beat. With a flying tackle, Layfield brought down his opponent short of the goal line, but landed beneath him. The Lehigh player, considerably larger than the defender, got up quickly. Layfield did not. He lay on the field, paralyzed, and was taken to a local hospital, where he was diagnosed with major spinal injuries. Placed in a full-body cast and transferred to Johns Hopkins Hospital, physicians debated what to do next.

Upon hearing that his teammates wanted to cancel the remainder of the season, Layfield urged them to keep playing, in a scene that could have come from Knute Rockne All-American. While his teammates played out the season, they had little enthusiasm and finished with two wins, five losses, and a tie. Layfield stayed in contact with the team and assured everyone that he would not only recover, but would play again. His injury was too severe, however, and in January 1915 Hopkins surgeons performed a “last resort” operation, without success. He died on March 2, 1915, at home in Wilmington, Delaware. His funeral was attended by presidents Henry Drinker of Lehigh, Frank Goodnow of Hopkins, and many of his fellow students and athletes.

The 1915 Hullabaloo contains a four-page tribute to Layfield, remarkable because yearbooks focused on seniors, not freshmen. His classmates and the university vowed to create a memorial, but this was delayed since the university was moving to the new Homewood Campus. In March 1917, in front of Gilman Hall, two flagpoles were erected, flanking the main entrance, bearing plaques from the administration and students. For unknown reasons, these poles were cut off in the late 1930s, leaving two six-foot “stumps.” In 2008, a major renovation of Gilman Hall began, and the memorial was removed entirely.

If you follow Hopkins sports, when Coach Margraff leads the team on the field for the 2013 football season, take a moment and remember young Mr. Layfield. You won’t find his name in any record book, but no player gave more of himself to the game.