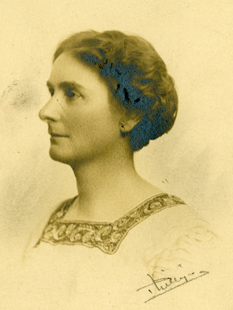 The history of coeducation at Johns Hopkins is a long and – by today’s standards – a not entirely complimentary story.

When our founding president, Daniel Coit Gilman, and the original trustees were planning this university in 1875 and 1876, the question of admitting women was discussed. Presidents of two other universities – Charles Eliot of Harvard and James Angell of Michigan – offered their opinions on coeducation. Eliot was firmly against it, giving reasons that today sound ludicrous. He said coeducation was a “thoroughly wrong idea which is rapidly disappearing.” Coeducation might result in “unequal marriages,” he said, and might “threaten a woman’s good health.” And, he maintained that, while educating women was generally a good idea, they should be prepared for “a life fundamentally different from that of any man.”

Angell defended coeducation, but with little enthusiasm. As president of the University of Michigan, he was required to admit women. But his explanation for how it worked sounds paternalistic: “There has been no practical embarrassment arising out of the system. Our girls for the most part are matured, and the greatest care is taken by myself and others in their general welfare…The young men have, so far as I know, borne themselves with the greatest courtesy and prudence towards the ladies. The girls go to and from the College undisturbed. When the boys are hustling about the streets, they fall back and let the ladies pass by.”

President Gilman himself seemed predisposed against coeducation. In his Inaugural Address, delivered February 22, 1876, he expressed his reluctance to expose women “to the rougher influences which I am sorry to confess are still to be found in colleges and universities where young men resort.” While not opposed to educating women, he preferred that it be done in a same-gender setting. Given these ideas, and the faint praise expressed by Angell, it is little wonder that, when Hopkins opened in October 1876, the student body was composed of all men, undergraduate and graduate alike.

Despite seemingly monolithic opposition, several women attempted to gain admission, and some were successful. Just a year after Hopkins opened, Martha Carey Thomas and Emily Nunn tried to enter a degree program. Thomas was successful in gaining admission but left in frustration after a year, while Nunn was denied access to the biological laboratory. 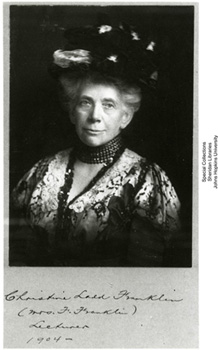 Two other women persevered to complete their studies at Hopkins. Christine Ladd-Franklin (left) entered in 1878 and completed her PhD program in 1882. Despite having Professor of Mathematics James J. Sylvester as her “champion,” the Hopkins trustees refused to confer the degree she had earned. In 1926, Ladd-Franklin finally received her PhD, 44 years overdue. In the meantime, another remarkable woman not only completed a degree program, but actually received her degree. Florence Bascom (above) entered Hopkins in 1891, studying geology. In 1893, she was awarded the PhD, the first woman to receive a Hopkins degree of any kind. In Bascom’s case, Edward H. Griffin, Dean of the College Faculty, helped to shepherd her past obstacles.

As these examples show, women seeking admission to Hopkins in the 19th century found the path smoother with someone in a position of authority to plead their case. Change eventually came through Mary Elizabeth Garrett, daughter of trustee John Work Garrett. In 1892, she contributed $306,977 to allow the School of Medicine to open. One of the conditions on her gift was that women be admitted to the School of Medicine on the same basis as men. The trustees reluctantly accepted this, then, in 1907, they voted to allow qualified women to enter any division of Hopkins as graduate students. From that point, while still treated with condescension in many quarters, women at least had a defined path to graduate study. For women wishing to enter the full-time undergraduate program, however, the wait extended until 1970 (that story to follow later this month).