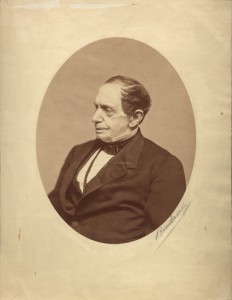 Prior to the advent of television, radio was king of broadcast media. Families of at least modest means in the 1930s would gather around their radio set listening to news programs and entertainment. While music and sports were popular, dramatic presentations were considered the epitome of broadcast. The Lone Ranger was a well-known radio drama (later a favorite on television), and there were comedy programs such as Abbott and Costello. People listened to their radio and used their imaginations to illustrate what they could not see.

One program prominent in the 1930s and 1940s was Cavalcade of America. This series, on radio from 1935 to 1953 before moving to television, presented episodes on history and biography. “The Declaration of Independence” and “The Constitution of the United States” were dramatic re-enactments surrounding the adoption of those documents. Biographies focused on individuals who were not well-known but still important figures. Johns Hopkins was one of those subjects and on May 26, 1941, Cavalcade of America featured a half-hour drama on our founder.

This episode begins with a family discussion in 1807, where Samuel Hopkins, Johns’ father, announces his intention to free their slaves who worked the family’s tobacco fields in Anne Arundel County. Johns, then twelve years old, is dismayed because this means he, along with the older siblings, will have to leave school to take over in the tobacco fields. Johns throws a tantrum and declares that he will overcome this obstacle and become rich and famous.

I found this episode to be poor history in many respects. Because little remains of Johns’ personal papers, we do not know what was said or how individuals felt about events, so some degree of literary license must be allowed. This program, however, presents Johns, from the age of twelve until near his death, as a bitter, spiteful man seeking vengeance on society and everyone who wronged him. This does not square with firsthand accounts of nieces and nephews and their children, to whom Johns was a kindly uncle who indulged them during their visits to his home. Johns was known to entertain lavishly, sparing no expense for the comfort and enjoyment of his guests.

Two events depicted near the end of the program are simply wrong. Johns is portrayed as suffering from cholera late in life, and at the end of the drama, he collapses and dies in his cousin’s arms, immediately after finishing plans to found a university and a hospital, having finally overcome his bitterness. That probably played well on radio, but it’s not the truth. He survived cholera as a young man, and incorporated The Johns Hopkins University and The Johns Hopkins Hospital in August 1867, six years before his death. He died from pneumonia late on Christmas Eve 1873, peacefully in bed attended by his physician, his dog Zeno, and family members. His experience with cholera decades earlier may well have influenced his decision to found a hospital.

Cavalcade of America is made available through the Internet Archive, and I encourage those interested to have a look and listen. Keep in mind that, if these programs were modern television presentations, they would bear the disclaimer, “dramatic re-creation.” As entertainment, the episode on Hopkins is interesting; as history, not so much. If you wish to listen to the episode on Johns Hopkins, scroll to number 218 in the program list.

There are, unfortunately, few biographical sources on our founder longer than an encyclopedia article. The only book-length biography is Helen Hopkins Thom’s Johns Hopkins: A Silhouette (1929; reprinted 2009). An excellent biographical article appeared in a 1974 issue of Johns Hopkins Magazine by Kathryn Jacob, entitled “Mr. Johns Hopkins.”