Explore Mars, the moon, and the skies 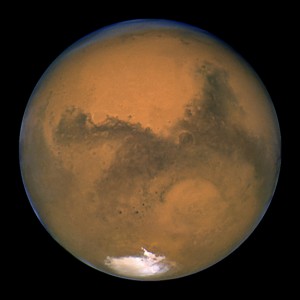 For nearly fifty years, people have attempted to send spacecraft to Mars. During the 1950s and 60s, an increasing preoccupation with the future and technology helped transform America’s outlook, as well as its conception of itself, as if seen anew from space. Even though by the beginning of the 21st century, only ten missions out of thirty-three attempts to launch satellites to Mars had been completely successful—fashion, furniture, comic books, science fiction, and children’s toys were profoundly affected by these explorations.

The fantasy of Mars captured the public’s imagination. Where astronomers left off, fiction took over sustaining the myth about life on Mars. Stories about Mars during the post-World War II era contained dark elements of fantasy. Ray Bradbury’s The Exiles depicted mythic characters exiled on a perishing Mars when the last of the books containing their stories were burned or lost. At Bell Laboratories, closely related to NASA in its earliest years, engineer Billy Klüver organized groundbreaking collaborations with artists, including Rauschenberg and Andy Warhol, to inject space-age technology into artwork.

By the sixties, NASA established a strong exobiology program to study the potential for life beyond Earth. Over the years, this study has expanded to multidisciplinary astrobiology – increasingly focused on planetary exploration missions. NASA sent the Viking lander mission to Mars in the 1970s to answer the overarching question: does life exist on the red planet? The Viking lander’s payload carried sophisticated analytical laboratory equipment to Mars, devoting a significant amount of the mission time to identifying, collecting, preparing, and analyzing samples. Despite yielding tremendous amounts of data and information about the planet, the answer about life on the red planet remained equivocal.

The 1976 Viking missions searched for these compounds through three experiments. One experiment known as Labeled Release (LR) was originally called Gulliver, for the Lilliputians, in this case microorganisms it was seeking. Designed by Dr. Gil Levin to detect carbon dioxide released by microorganisms as a result of their metabolic activity, this experiment could detect growth and metabolism associated with the rate of carbon dioxide production. The LR experiment tested the soil of Mars nine times at two different landing sites under different temperature regimes and environmental conditions. 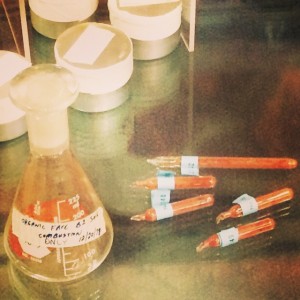 A permanent exhibit, curated by Emily Carambelas, that resides on C-level of the Eisenhower Library explores Dr. Levin’s work, from developing the LR instrumentation and joining the Viking Mission to performing the test on Mars and interpreting the data. Next to the display, browse an exhibit guide.

Perhaps Buzz Aldrin summed it all up best when he said:

“Exploring and colonizing Mars can bring us new scientific understanding of climate change, of how planet-wide processes can make a warm and wet world into a barren landscape. By exploring and understanding Mars, we may gain key insights into the past and future of our own world.”

Mars is in the news a lot more these day, with NASA reporting that Curiosity has found life-sustaining materials on Mars. Some other cool things:

Here’s how to explore through Google Maps:

Note: You need to be in the new version of Google Maps for this to work properly.

We’d love to hear if you have used these, especially for fun, but also in study or school.