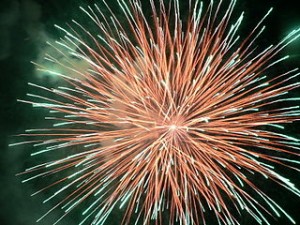 When the crowds gather at Baltimore’s Inner Harbor on the evening of December 31, and the live music begins playing, and the fireworks bring the night sky to vivid life, we’ll be participating in one of the most longstanding rituals that mankind has yet devised: celebrating the arrival of another new year. In observing that most nations follow the Gregorian calendar, Wikipedia calls the New Year’s celebration “the closest thing to being the world’s only truly global public holiday.” Yet that assumption of unity is belied by the rich variety of ways in which the New Year is celebrated around the world.

Many cultural and religious traditions, relying on the lunisolar calendar instead of the Gregorian variety, choose to celebrate their new year on other dates and in other ways. Chinese New Year is perhaps the best known of these alternative folkways, due to its colorful public celebrations infused with an aura of ancient ritual and belief. And there’s no better way to immerse yourself in this fifteen-day-long holiday than to view the video First Moon, a rich, lively illustration of how the new year is celebrated by the world’s most populous nation. It’s available in VHS format from the Sheridan Libraries; but if you don’t have a VCR, why not view First Moon on the spot in the MSEL AV Center on A-level?

Another lunisolar new year’s celebration with an age-old lineage is the Jewish New Year, Rosh Hashanah (literally, “head of the year”). A central aspect of this holiday is the re-rolling of the Torah scroll (the first five books of the Old Testament) back to its beginning to recommence a year-long reading of its contents. If you’d like to see some of the library’s old and rare copies of the Old Testament in the Hebrew language, pay a visit to our Special Collections Department. A shofar, or traditional ram’s horn trumpet, is also blown during the celebration. Unlike the more public Chinese New Year celebration, the Jewish New Year is focused on the place of worship and the home, where festive holiday meals often play a central role.

In Islam, the New Year is also part of that religion’s lunar-based liturgical calendar. The Islamic calendar, or Hijri, dates from the year in which the prophet Mohammed made his famous journey from Mecca to Medina. In contrast to many other new year’s celebrations, Muslims are likely to observe the new year of the Muslim calendar in quiet contemplation and remembrance. If you’d like to become more familiar with the life of the prophet, use Catalyst to put a request on the library’s copy of the DVD “The Message (Al-Risalah).”

These are just a few examples of the celebratory genius of the human spirit on display as one year ends and another begins. Indeed, one website dedicated to New Year’s traditions provides informative summaries of 62 different national, ethnic, and religious versions of the event.

So why do we make such a big deal about this arbitrarily-defined day? It’s because the New Year—wherever, whenever, and however its arrival is observed–infuses us with a sense of new possibilities and new beginnings, the chance to start over with a clean slate. It reminds us that we live in a universe of repeating cycles and continual renewal, that we are part of something bigger than ourselves. Janus-like, it fills us with a deeply-felt admixture of nostalgia and hope.

Have a happy and hopeful New Year!