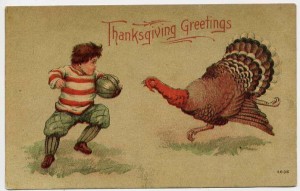 Please note that MSEL and the BLC will be closed Thursday, November 27 for the holiday. We will close at midnight Wednesday and reopen Friday at 7:30am.

When we think of Thanksgiving, what comes to mind? Turkey, parades, football, shopping and food. Truthfully almost none of those things were at the first Thanksgiving with the exception of food. There was no turkey or shopping. The first Thanksgiving was not even in November. It also was not a once a year event for the original Pilgrims either. Days of Thanks were a fairly regular occurrence for the Pilgrims. They would have them for surviving the winter or a storm or receiving a plentiful harvest to thank God for his gifts. As far as we can tell, the first “Thanksgiving” was actually in the spring. They ate items like fish and water fowl. And had vegetables like leeks and cabbage. 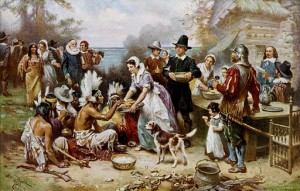 Since 1621, Thanksgiving Day has changed a lot. There are always new recipes to try and parades to watch. However if you are ever interested in discussing days of thanks with Pilgrims, just head to Plimoth Plantation in Plymouth, Massachusetts. The Pilgrims will be happy to discuss it with you.

Of course, now you want to know even more about the holiday, don’t you? Check out these books in the library and search America: History & Life for articles on the history of this truly American event!