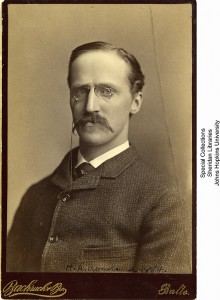 When Daniel Coit Gilman was named president of The Johns Hopkins University in 1875, the trustees left the matter of recruiting faculty in his hands. With an eye to the future, Gilman sought to fill the ranks with “young scholars of promise,” likely to become important figures in their fields. Gilman solicited recommendations far and wide. In physics, one name often repeated was Henry Augustus Rowland.

Born in Pennsylvania in 1848 and trained as a civil engineer, Rowland was isolated at Rensselaer Polytechnic Institute when he came to Gilman’s attention. Gilman realized that Rowland, who had abandoned engineering for physics and electricity, was “a young man of rare intellectual powers and of uncommon aptitude for experimental science.” Gilman offered Rowland the position of professor of physics, at a beginning salary of $1,600. Since the university at that time existed only on paper, it was a gamble for Rowland as well as for Gilman. Accepting Gilman’s offer, he wrote, “I have gone there on faith, and will do my best to make the institution a success.” Rowland, at the age of 28, became the first faculty member hired for the new university.

With nearly a year between his hiring and the opening of classes in October 1876, Rowland spent his time in Europe (part of it traveling with Gilman), gathering the components of a laboratory and pondering the questions on which he would focus his research and instruction. He became interested in the study of light and achieved his most durable success when he perfected a device to divide the visible spectrum into constant and reproducible components. His “Ruling Engine,” as it was known, was so well designed that, decades later, it could not be improved significantly.

Rowland was interested in pure science rather than in patentable discoveries, and he expected his students to share his enthusiasm for learning. A legend exists concerning his students that, when asked by a colleague what he would do with them, Rowland allegedly replied, “Do with them? I shall neglect them, of course!” Many of his students, however, reported a more benevolent relationship.

Perhaps due to his early interest in electricity, that subject became part of physics in the 1880s, well before a School of Engineering was established. The Proficiency in Applied Electricity certificate (PAE) was granted to those who completed a program in what eventually became electrical engineering. One notable recipient of the PAE was John Boswell Whitehead, who went on to earn his PhD at Hopkins and become our first Dean of Engineering.

Rowland might have continued his pursuit of pure science indefinitely, but fate intervened. He was diagnosed with diabetes, at that time an untreatable disease. Realizing his life would be cut short, he shifted his research to areas that would bring financial benefits. He devoted the last five years of his life to perfecting a new telegraph apparatus. This, along with consultancies on hydroelectric power plants and other inventions, left his family in comfortable circumstances when he died on April 16, 1901, at the age of 53.

In 1929, the University constructed a physics building on the Homewood Campus and named it to honor Hopkins’ first professor of physics. In 1991, when the Department of Physics moved to the new Bloomberg Center, Rowland Hall was renamed for Zanvyl Krieger. Although his name is no longer found on a building, Rowland’s contributions greatly enriched the study of physics and left a legacy to be carried forward by his successors.