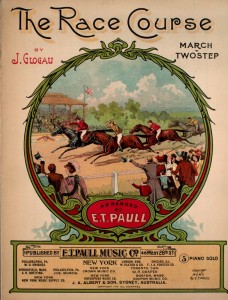 This Saturday is the third one in May, so you know what that means–the Preakness Stakes! Since 1873 the top three-year-old Thoroughbreds in the world have been assembling at Baltimore’s Pimlico Race Course to try to capture the second jewel in the Triple Crown of Thoroughbred Racing. Only 11 horses have won the Triple Crown, with Affirmed being the last in 1978. Nine horses have won the other two races but have fallen short at “Old Hilltop.”

While the Preakness is the shortest of the three Triple Crown races–the Kentucky Derby and the Belmont Stakes are the other two–it has its share of excitement and traditions. After the call to post, the spectators join the Naval Academy Glee Club in singing “Maryland, My Maryland.” After the horses finish their 1 3/16 mile gallop, the winner is draped in a blanket of Blackeyed Susans and the owner is presented with the Woodlawn Vase, one of the most valuable trophies in sport. Spectators can loosen up with the signature drink, also known as the Blackeyed Susan.

One of the greatest Preakness (and Triple Crown) winners was War Admiral in 1937. On November 1, 1938, War Admiral ran again at Pimlico. But this time it was in a match race against a single horse–Seabiscuit. This race was billed as the “Match of the Century.” Although War Admiral was a huge favorite, Seabiscuit beat him by more than four lengths. Learn more about this match from the Hollywood movie or from the PBS series American Experience.

More than 100,000 fans jam into Pimlico on Preakness Day, so try to take public transportation if you go. In addition to an exciting day of racing action, the InfieldFest will feature a concert by Lorde and other musical acts. There is something for everyone at the Preakness, so consider joining in the fun at this legendary Baltimore event.