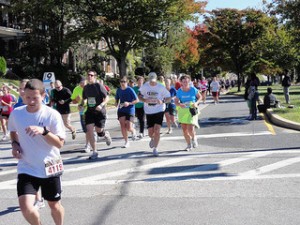 If you plan to be in Charles Village on Saturday, October 13, 2012, be prepared for thousands of runners thundering down Guilford Avenue and St. Paul Street. The 12th edition of the Baltimore Marathon will start at 8:00 am and will continue until early afternoon. Even though it is only a few years old, this race is prominent enough to be a qualifying race for the legendary Boston Marathon. The sport has grown rapidly over the past 30 years, with the number of U.S. marathon finishers growing from an estimated 143,000 in 1980 to 518,000 in 2011.

As you may already know, the first “marathon” was not a race at all, but rather, a long run by the Greek messenger Pheidippides to announce the defeat of the Persians at the Battle of Marathon in 490 BCE. It is unclear whether this famous run actually took place or not, 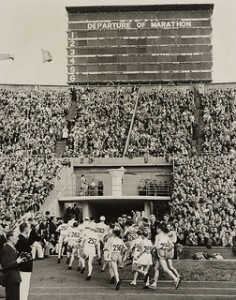 but it was made popular in the 19th century in poems by both Robert Browning and Elizabeth Barrett Browning. A marathon race was run in the first Olympic games in 1896 and has been included in each of the games since then.

Running has long been a subject for popular culture, including such movies as Chariots of Fire and Without Limits and novels such as The Loneliness of the Long-Distance Runner. But don’t be deceived by titles: the film Marathon Man has more to do with spies and torture than it does with running—and it is not for the squeamish!

If you are interested in running your own marathon, the library can help with your training. If you are more interested in researching exercise and health, we can help with that, too. Hopkins researchers are looking at topics like death risk for marathoners and publishing the results in journals such as the American Journal of Sports Medicine. But, please, take a break from your research this Saturday morning and cheer on your many colleagues and classmates who are grinding through 26.2 miles of Baltimore pavement.

One thought on “It’s Marathon Time”