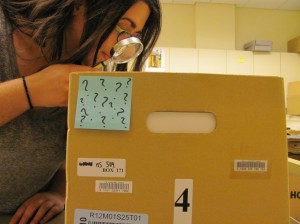 In February 2013, Jordon Steele announced that the University Archives would be hiring a full time project archivist to finishing processing the Roland Park Company Archives. I am using my inaugural post to introduce myself as that archivist! My name is Valerie Addonizio and I joined the Archives Team at the Sheridan Libraries in March 2013.

When I arrived I set immediately to acquainting myself with the collection and its captive audience. The main impressions I received from local residents and colleagues were that The Roland Park Company Archives are in demand, are very important to the City of Baltimore, and that the collection is epic–and not just in scale.

The Roland Park Company Archives has been around for a long time by now. The multiple acquisitions and phases of description means the collection has taken on a bit of its own history, in addition to the history it represents. In the archives world we refer to this changing of hands through time as the order of custodianship.

In a previous blog entry Rob Gamble mentions the need to understand the methodology of the original clerks of the Roland Park Company, and how that compares to the previous version of the finding aid (hereafter referred to as the Cornell Finding Aid based on its origin) created prior to the collection’s acquisition by JHU. What I faced upon coming to the collection was that plus more, since there was a lot of work done at Johns Hopkins after the collection arrived, but before I did.

Thus, my first task was to reconcile what was by now the four different eras of organization in the Roland Park Company Archives: its original order, the Cornell Finding Aid, and what I personally refer to as Phases 1 and 2 of the description done at Johns Hopkins.

Archivists usually talk about what happens with physical items, but more and more in both description and the archives themselves we face just as many digital information challenges. I can take a single box as an example of how information changed through time. I nominate Box 171.

Phase 1 of the description done at Johns Hopkins also says that Box 171 contains documents from 1929, but breaks that down to “General correspondence A-Z” and “Salesmen daily reports.”

So, what is in box 171 now? And wait… what does “Letters 662-970” mean, and is that the same as “General correspondence A-Z”? Where do “Salesmen reports” fit in? What old information, like the old box number, can be discarded, and what should be kept? What is accurate and what needs more clarification and from which phase does the most accurate information come?

Well, as the new Project Archivist for the Roland Park Company Archives it is now my pleasure to find out.