By Rob Gamble, Processing Assistant and Ph.D. Candidate in the Department of History

Among the more engrossing items in the Roland Park Company Records are its many printed publications, advertisements, and photographs. In 1926, the company began publishing its own monthly newsletter, The Roland Park Company’s Magazine, “devoted to matters of interest to residents of Guilford, Roland Park, and Homeland.” No pennies were pinched in the production of the glossy magazine, which served as an advertisement for the company as much as a local interest journal. 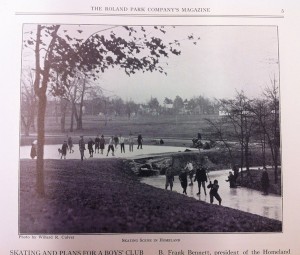 The magazine opens a window onto a neighborhood that was fully formed by the 1920s. One article noted that thirty men and women, members of the American Poetry Circle, met at the house of Mrs. Edward J. Croker for “an evening of ‘Christmas in Poetry and Song.’” Another listed all the newest debutantes at the Bachelors Cotillion. Alongside poems about roses were tips for how to maintain a garden in January. (A favorite new tip of mine: To prevent insects from eating your indoor garden plants, spray them with a nicotine-based solution!) Under a picture of boys playing ice hockey in Homeland, one article reminded “all who skate on the ponds to realize that they must conserve the beauty of the banks and prevent in every way damage to surrounding property.”

Photographs and articles portrayed a bucolic landscape and closely-knit community. Signs of the many social tensions that played into the formation of one of America’s first planned suburban neighborhoods were not to be found in the magazine. Even if it presented an idealized portrait, however, the magazine vibrantly captures a neighborhood that was attempting to define itself as a community. 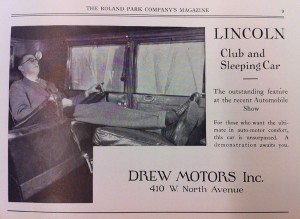