By Carla Ruas, Archives Assistant and a student in the Master of Liberal Arts program

It’s not an easy task to build a suburban development in a vacant area in Baltimore: there are roads to plan, trees to plant–and even mosquitoes to kill, an adventure that the Roland Park Company documented through their own records as well as Baltimore City’s reports from the 1920s to the 1960’s.

Planning the neighborhoods of Guilford, Homeland, and Roland Park was not without its challenges. For example, in its choice to decorate streets with trees and plants such as the vine ‘Winter Creeper’, formally called Euonymus Radicans, and the small tree ‘Yew’ (or Texus Canadensis), the Roland Park Company encountered an unexpected outcome. Records show that in 1921 much of this flora started to die from malnutrition in the Guilford neighborhood. (The solution, proposed in a letter by the Davey Tree Expert Co, was that new purchasers give more attention to these plants and treat them with a mixture of bone meal and loose manure). 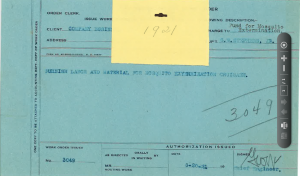 Another problem faced during construction was the infestation of mosquitoes in the area. Invoices reveal that in 1921 the company purchased labor and material for a “mosquito extermination crusade.” Also distributed was a 1915 flyer signed by the mayor entitled “How to get rid of mosquitoes.” Among the instructions was that owners should eliminate standing water from their premises, since “killing mosquitoes one at a time was a slow process.” And residents who chose not to comply were subject to a fine.

As these examples demonstrate, the land planning achievement that the Roland Park Company’s signature project became encountered challenges that all projects of its ambition would face.