Libraries Through the Ages–Part III 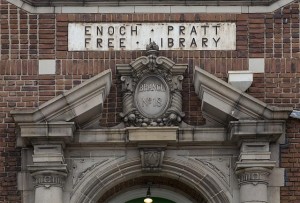 The two previous posts in this series told the story of libraries through the middle ages. This final installment will bring things up to the present by describing the public library movement, the rise of the great national libraries, and new library services. This leaves out a lot of library history, so you might want to have a look at The Library Book by Alan Bennett for the full account.

While public libraries existed in various forms in England from the 17th century forward, our notion of a free, public lending library is quite recent. It was the Public Libraries Act of 1850 that got the modern public library movement started in England. Open, browsable stacks replaced books chained to tables, and community members could even take books home with them! It was not long before philanthropists in England and the United States established programs to fund public libraries in cities large and small. Our own Peabody Library, founded in 1857, is a good example of this. Andrew Carnegie funded the construction of over 2,500 libraries in the United States, Canada, Great Britain, and elsewhere. While Carnegie supplied most of the funds for construction of the library building, he required that the local community show a commitment to provide free library service for all. Before receiving a grant, a town had to provide a site and raise enough money to ensure its continued operation. In 1882, Baltimore philanthropist Enoch Pratt funded the creation of the public library system in Baltimore that still bears his name. “My library,” Mr. Pratt is attributed to have said, “shall be for all, rich and poor without distinction of race or color, who, when properly accredited, can take out the books if they will handle them carefully and return them.” The Pratt Library also benefitted from a grant from Andrew Carnegie to build several branches in the early 20th century.

While the public library movement brought books to individual communities, the 18th- and 19th-centuries saw the establishment of many great national libraries that still exist today. Great libraries such as the Bibliothèque nationale de France, the British Library, the National Library of China, and the Library of Congress (not technically a national library, but a de facto one) not only continue to amass enormous collections of books, sound recordings, films, and other media, but they also help standardize library services. The Library of Congress, for example, is the global leader in preservation programs designed to ensure future access to all types of library collections. They also maintain classification and subject heading systems to provide the widest access possible to their collection of more than 32 million books, 61 million manuscripts, 3 million sound recordings, and much more.

Today’s libraries extend way beyond lending books and answering reference questions. Digital collections, data management services, and digital media labs are only a few of the innovative services offered by libraries in the 21st century. You need look no further than our own Brody Learning Commons to see the changing face of libraries today. While we are not abandoning our services of the past, we are constantly looking for ways to support the research needs of scholars today and tomorrow.