Convened in Philadelphia in May 1787, members of the Federal Convention, dissatisfied with the Articles of Confederation, decided to draft a new Constitution. It was completed in September of the same year and would shape the way the United States are governed to this day.

The Articles of Confederation let each state operate nearly as an independent country. The Congress of Confederation, the overarching federal governing body at the time, could not raise funds or enforce any consequential decisions without a unanimous vote by the delegates representing each state. The new Constitution would allow for a stronger Federal government that would still preserve the sovereignty of each state.

The Constitution, for which conflicting plans had been proposed, was signed after Roger Sherman proposed his Great Compromise — also called the Connecticut Compromise. The first Congress opened on March 4, 1789, which became the first date selected for Inauguration Day. It was changed to January 20th by the Twentieth Amendment. George Washington’s inauguration was held on a different day: April 30th, 1789. 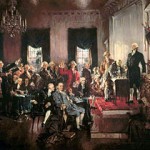 taxation were discussed). The Constitution was amended 27 times after its ratification in 1789. The Bill of Rights comprises the first ten Amendments. The “Act Prohibiting Importation of Slaves,” signed in 1807, would take effect in 1808. The final draft of Abraham Lincoln’s Emancipation Proclamation was signed 150 years ago on January 1st, 1863, but the Civil War was going on (Lincoln would give the Gettysburg Address in November the same year) and freedom from slavery could be ensured only after succeeded in having the Thirteenth Amendment adopted in 1865, thus making abolition of slavery part of the Constitution.