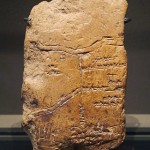 o grab from each other in their stranded car while arguing about which road to take (that was before the advent of GPS navigation devices, of course). Usually associated with geography, they contribute in fact to many fields. They are powerful tools for historians and sociologists, for instance, and can provide insights in the fields of public health and economics. Besides, they are beautiful and can more than often be considered as objets d’art.

Maps have been created since ancient times and can be found in various shapes, sizes and materials, like the three thousand year old cuneiform tablet kept in the Louvre Museum that depicts a map of Mesopotamia, seen above.

Before the return of Christopher Columbus from America, a globe by Martin Behaim of Nüremberg showed the world as it was known at the time: his 1492 Erdapfel is at the Germanischen Nationalmuseum. It is considered to be one of the oldest globes ever made.

A map of London in 1854 by the famous physician John Snow helped explain a violent outbreak of cholera in the city’s Broad Street area: the map showed that most cases of cholera were concentrated around a public water fountain. At a time when the germ theory was not yet widely known and the mechanism of transmission of the disease was not clear, Snow’s map allowed him to establish a correlation between the cholera epidemic and contaminated water.

The Sheridan Libraries have great map collections that one can consult in the GIS & Data Services Department in the Homewood campus Eisenhower Library, in the beautiful George Peabody Library in Mount Vernon, and in the Garrett Library in Evergreen House and Muse

um. A significant number of maps can already be seen online on the JScholarship website, which will, when completed, provide access to digitized images from the libraries’ complete collection of maps of Maryland and Baltimore. These maps convey a lot about the evolution of Baltimore. Some are from the early times of the city, like this map from a sketch John Moale made in 1752.

When the French army, led by General Rochambeau, marched along with American forces in 1781-1782 from Phillipsburg, NY, to Yorktown, VA, and back to Boston, MA, one of Rochambeau’s officers, the cartographer Louis-Alexa 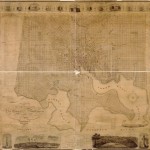 ndre Berthier, made a journal with manuscript maps of various places along the way. Of course, the Sheridan Libraries have a reproduction of the map Ville, Port et Rade de Baltimore dans le Maryland in 1781 held at the Library of Congress. They have as well a reproduction of the famous map by T. H. Poppleton from the same repository; dated from 1822, the map shows a plan of the city and is bordered by engravings of its main buildings.

We also own maps showing the 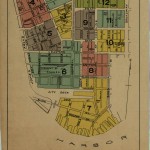 administrative divisions of Baltimore city, such as this one from 1822.

Is this to say that the Sheridan Libraries never left the early Maryland era and did not enter the age of space travel and new technology? Not at all! The map collection includes remote-sensing images of Maryland created with Landsat imagery. And if one needs to analyze geospatial data and create custom designed maps, one look at the GIS library guide will provide resources and information on ArcGIS software, including training and the possibility of loading a copy of the software. 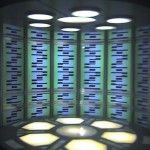