By Carla Ruas, Archives Assistant and a student in the Master of Liberal Arts program

What can the scrapbooks in The Roland Park Company Archives reveal to researchers about history? The 32 books include clippings of the company’s advertisements published from 1892 to 1959 in local newspapers and magazines. Were these clippings perhaps collected by the company’s secretaries? There’s no sure way of knowing. But regardless of their origin, we can gain insight into some curious information about what was considered appealing to Baltimore’s consumers.

One of the earliest advertisements was published 1892 in “The Baltimore News.” In order to attract potential buyers, it emphasized the convenience of having electric lighting on the streets and inside the houses. Compared to gas, electricity is touted as a “cool clean agent which gives light and does not heat vitiate the air.” The announcement also states that it would not be expensive for residents since Roland Park was located outside the city’s limits. 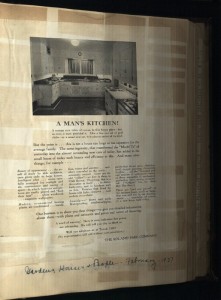 In 1937, the Roland Park Company’s marketing strategy focused on new houses equipped with modern kitchens filled with appliances for the family. An advertisement published in the magazine “Gardens, Houses & People” draws attention to this part of the house with the slogan “A man’s kitchen!” But it soon explains that men would only provide this “happy place” for their wives to manage.” The investment in a nice kitchen is compared to buying a new set of golf clubs!

In 1942, during the Second World War, the advertisements struck a more sober tone. Instead of advertising houses, Roland Park chose to announce a campaign for a Red Cross War fund. The company also published an open letter wishing American soldiers a Merry Christmas and “speedy victory” in the battles.

Perusing the Roland Park Company’s scrapbooks, it becomes evident they contain a lot more than carefully-glued advertisement clippings. Each page holds a little bit of history.

One thought on ““A man’s kitchen!”- The Roland Park Company’s Historic (and Curious) Advertising”