Beyond the Bookplate: Small-timore, 19th-Century Style

It is 1850, and an unidentified chronicler sits amidst the Greek Revival architecture of the Mondawmin Estate, awaiting the start of the third auction to empty the 10-year-old mansion of its contents. The multi-day auction had been advertised in the Baltimore Sun, and the prior days have seen the sales of considerable collections of furnishings, fine art, wines, household goods, and “an extensive and rare collection of green house plants.” This gentleman chronicler, certainly a prospective if not actual buyer of some of these wares, has made careful notes 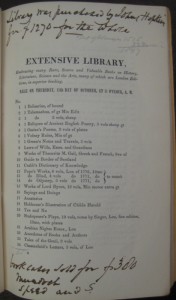 regarding the purchasers of wines and paintings. Today, the contents of the library are being offered. The auction catalog describes the library as “embracing many Rare, Scarce, and Valuable books on History, Literature, Science and the Arts,” and the list of titles indicates an emphasis on biological science, medicine, and American history. Most of the books date from the 18th and early to mid-19th century.

The estate is that of the late Dr. Patrick Macaulay, whose death in June of 1849 and outstanding debts have led to the auction. Another person with a vested interest in this day’s sale is a familiar name around town even then. Our chronicler notes that the “Library was purchased by Johns Hopkins for $1,270 for the whole.” Two annotated copies of the Cannon and Bennet auction catalogue are housed at the Maryland Historical Society.

So where are the books now? 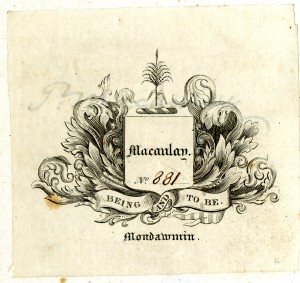 Jump forward almost 100 years to find John Calvin French, the former head librarian, publishing his seminal work, The History of the University founded by Johns Hopkins. In the course of his research, he grows curious about the library of our founder and comes across this same collection of books bearing a bookplate reading “Being and to be. Mondawmin” flanked by sheaves of wheat. French investigates Macaulay and finds that his oration, and later publication, on medical improvements lay groundwork for the modern medical curriculum and was perhaps influential on Hopkins as he formulated plans for his bequest to Baltimore.

It is likely that Hopkins and Macaulay knew each other through Board memberships and other civic work as well as at least one real estate transaction. When Hopkins purchased the library, he was buying the collection of an associate and possibly a friend. 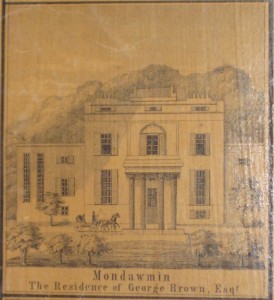 Over the years there was some attrition to the collection, and not everything was retained. In the 1880s, the books came to the Johns Hopkins Hospital, where many of the medical texts still reside as part of the Institute of the History of Medicine. Books on other topics were transferred to the Homewood campus, eventually ending up in the Sheridan Libraries. The majority of these are now housed at the George Peabody Library.

Macaulay’s interests were broad, and included in the collection are such titles as the 1766 edition of Catherine Macaulay’s History of England, Alexander Henderson’s History of Ancient and Modern Wines, George Wentworth’s The Poetical Note-book and Epigrammatic Museum, Patrick Keith’s A System of Physciological Botany, and Hening’s Laws of Virginia.

Mondawmin itself was eventually razed, having been the home of the Brown family (as in, Alex. Brown and Sons) for many decades. The neighborhood of Mondawmin is now better known by the name of the shopping center currently located there, the Mondawmin Mall.