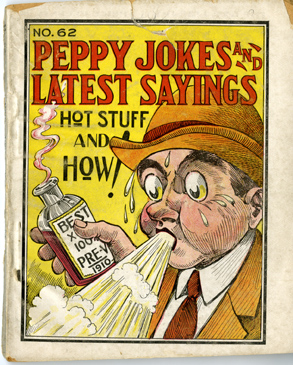 Did you hear the one about two German teenagers who opened a publishing house in Baltimore? Nope, this is not the set up to some real bad joke involving lederhosen and sauerkraut, but rather a breezy summary of the one and only Ottenheimer Publishers of Baltimore!

So, back in 1890 entrepreneurs-in-training Moses and Ike Ottenheimer were looking for a way to make money, and their aunt loaned them $100 to start a business, provided that whatever line of work they started, it was not to interfere with their honoring of the Sabbath. They decided to go into publishing, specializing in cheaply produced, pocket-sized joke books that proved to be a hit among dandies, cravat-wearing party animals, and students alike! Since the majority of their jokes were published before the onset of copyright laws, the Ottenheimer boys would send staff over to all the great old Baltimore theaters to copy verbatim  the successful jokes from various vaudeville performers. Word quickly spread that the Ottenheimers had an ear for the funny, and over one million of these joke books were sold. Beginning around the 1930s,  joke books became less popular and the Ottenheimers moved to publishing other types of books (in fact, the printing plates for all the joke books were recycled for scrap metal during WWII!). The company went out of business in 2002.

I’m sure you are now simply dying to know about these jokes. Well, you are in luck because it happens the classy George Peabody Library has a bunch of these jaunty joke books and you can view a selection of covers and, um, hilarious jokes online! I’ll leave you with a joke that set the world in stitches back in 1915:

Lady: “How much are your lollipops for children?”
Clerk: “Fifty cents for a dozen.”
Lady: “Thanks, I’ve only got eleven. I’ll call later.”