Q: Who was Owen Hatteras?

A: Owen Hatteras was the pseudonym adopted by H. L. Mencken and George Jean Nathan when, as editors of The Smart Set magazine in the 1910s and ’20s, they needed to concoct a short story or comic piece to fill up space.

Q: What do Willa Cather, James Joyce, F. Scott Fitzgerald and W. E. B. DuBois have in common?

A: Besides being famous 20th-century writers? They all published in The Smart Set.

Q: What were Saucy Stories and Parisienne?

A: Risque pulp magazines also edited by Mencken and Nathan to channel some funds to The Smart Set. 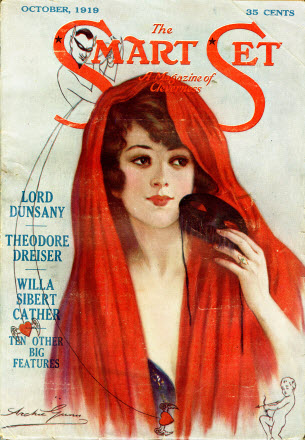 If you’ve scored 100% on this quiz so far, wow, you are officially a die-hard fan of The Smart Set. You probably know that The Smart Set combined an irreverent hipster sensibility with literary savvy and street-wise know-how about operating a shoe-strings publication. You might know that Hopkins is the lucky possessor of not one, but two H. L. Mencken collections—the Robert A. Wilson and the George H. Thompson—both housed at the George Peabody Library in Mt. Vernon, one of the Sheridan Libraries’ rare book libraries. And you may also know that many Smart Set issues have been digitized at the Internet Archive and HathiTrust.

But even for you Smart Set gunners, there are mysteries about this magazine that have yet to be plumbed. One of these has to do with its cover illustrations. Little is known about them because most copies of The Smart Set preserved in libraries were bound—meaning the covers and ads were ripped off.

Ours, however, were not.

A: A “Gunn girl” is very much like a Gibson girl, only she was drawn by Archie Gunn. In the early 20th century, many such variants of the all-American girl gained notoriety on the heels of the Gibson girl. Archie Gunn did not quite reach Charles Dana Gibson’s peak of popularity, so he was probably an economical choice as an illustrator for a not-quite-mass-market magazine. Gunn’s girls dominated The Smart Set‘s covers for over two years. (The image above shows the cover for October 1919.)

But the lovely ladies only make up one phase of this cunning little periodical’s visual history. There were elegant ballroom dancers, high-toned world travelers, flappers, and enervated moderns doing modern things like dancing with clowns. (Scary.) The illustrations tell us a lot about how the magazine’s editors perceived their readers’ desires, and how, in turn, they wanted the magazine to be perceived. They offer a window onto the emerging Jazz Age that is uniquely accessible to us in the image-oriented 21st-century. Best of all, they’re often funny and delightful.

You can learn more about The Smart Set—die-hard fan or no!—at an illustrated talk that I’ll be giving on March 31st at 6:30 pm to alumni and their guests at the Peabody Library. Please sign up in advance. We will also have some of the original Smart Sets on display.