Posts in this series were written by undergraduate students in the spring 2020 Museums & Society class Scribbling Women: Gender, Writing, and the Archive. We used rare books, archival materials, and digital primary sources in the Sheridan Libraries’ collections to prompt and guide inquiries into the creation, reception, preservation, and legacy of texts from the 1820s through the 1930s by North American women who brought attention to race-, gender-, and class-based inequities. Through their short essays, bibliographies, and analyses of digital sources, students are providing to a broad audience accurate information about and appreciation for the “scribbling women” they studied. For more about our series title, please see the first post. For more about our public-facing work, please see our gallery of final projects and blog.

Today’s post is a bibliography compiled by Julia Costacurta, Class of 2020, a Biomedical Engineering major. The creation of accurate online bibliographies was a key component of our class effort to make the works of these women writers better known and easier to read. 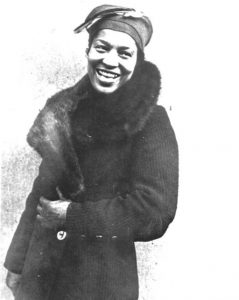 Zora Neale Hurston is regarded today as one of the most significant American writers of the twentieth century. Her most famous novel, Their Eyes Were Watching God, first published in 1937, is widely read and taught, and was recently named to the BBC’s list of “100 Novels That Shaped Our World.” However, Hurston did not gain financial success from her writings during her lifetime, and her fame faded in the 1950s. She died impoverished in 1960, and was buried in an unmarked grave.

Zora Neale Hurston was born in Notasulga, Alabama on January 7, 1891, and moved to Eatonville, Florida three years later; Eatonville features prominently in many of Hurston’s stories. Her mother died when she was only thirteen, and her father quickly remarried. His new wife was a woman whom Hurston despised. She left home at fourteen and lived an itinerant life for over ten years, working menial jobs and struggling to finish her education. When Hurston was twenty-six, she moved to Baltimore and claimed to be sixteen in order to qualify for free public schooling. She graduated from Morgan College, the high school of Morgan State University, in 1918, and continued to present herself as ten years younger than her actual age from that point onward.

Over the next ten years, Hurston earned an associate’s degree from Howard University and a BA in anthropology from Barnard, where she was the only Black student. While in New York, she befriended other Black writers such as Langston Hughes, Dorothy West, and Countee Cullen. She quickly became a leading figure of the Harlem Renaissance, publishing writings in books and magazines such as The New Negro, Fire!!, and Opportunity. Her first novel, Jonah’s Gourd Vine, was published in 1934.

In addition to fiction, Hurston also published a range of non-fiction articles and anthropological studies. In 1936, she received a Guggenheim fellowship, which she used to travel to Jamaica and Haiti. There, she collected stories and material on African rituals and voodoo which were eventually published in Mules and Men and Tell My Horse, two nonfiction collections. While in Haiti, Hurston wrote Their Eyes Were Watching God, which is considered to be her masterwork. She published her two other novels, Moses, Man of the Mountain and Seraph on the Suwanee, as well as her controversial autobiography Dust Tracks on a Road, in the years following, while working as a freelance writer and journalist.

Although much of Hurston’s writing was received with acclaim, she was often underpaid. By age sixty, she required public assistance to make ends meet, and was forced to enter St. Lucie County Welfare Home as a result of her financial and medical difficulties. She died of heart disease on January 28, 1960, too poor to afford a headstone for her grave.

Hurston’s resurgence in popularity, beginning in the 1970s, can be chiefly attributed to fellow Black female author and Hurston scholar Alice Walker, and the creation of African American Studies programs at American universities. Walker tracked down Hurston’s remains in 1973, and installed a grave marker at the site with the inscription “A Genius of the South.” In 1975, she published an article in Ms. magazine titled “In Search of Zora Neale Hurston,” which revived interest in her works, and in 2003 gave the Virginia Gildersleeve lecture at Barnard summarizing her stewardship of Hurston’s legacy.

Since this scholarly and popular renaissance, Hurston has been the recipient of many posthumous honors. Over the past thirty years, she has been inducted into the National Women’s Hall of Fame, the New York Writers Hall of Fame, and the Alabama Writers Hall of Fame. There have been entire conferences devoted to scholarship surrounding her works, and awards and fellowships given in her name. While Hurston didn’t receive the praise and profits she deserved during her lifetime, she undeniably left her mark on American literature.

This bibliography focuses on Hurston’s short stories, novels, and plays—omitting her nonfiction books, autobiography, news articles, musical compositions, and folk tales. A listing of these other writings can be found at the UCF Zora Neale Hurston Digital Archive.

My goal has been to provide, for each of the first editions listed, publication information as well as a link to an authoritative digital surrogate or e-text of the original publication, where copyright allows, or a catalog record. For many of the more obscure and unpublished works, I was unable to find an original publication; I have chosen in those cases to cite either archival holdings of manuscripts, or more modern printings of the works. If I was unable to find a digital surrogate of a given story, I relied on the recently published compilation Hitting a Straight Lick with a Crooked Stick and the 1995 Complete Stories for publication information. Works are listed chronologically by publication date, or, in some cases, date of composition.

—–. “Hurricane.” Taken at the Flood: The Human Drama as Seen by Modern American Novelists. Edited by Ann E. Watkins. Harper & Brothers, 1946. Originally in Their Eyes Were Watching God.

—–. “Escape from Pharaoh.” Ways of God and Men: Great Stories from the Bible in World Literature. Edited by Ruth Selden. Stephen Daye Press, 1950. Originally in Moses, Man of the Mountain.

—–. “The Tablets of the Law.” The Word Lives on: A Treasury of Spiritual Fiction. Edited by Frances Brentano, Doubleday, 1951. Originally in Moses, Man of the Mountain.

—–. “The Conversion of Sam.” Hitting a Straight Lick with a Crooked Stick. Edited by Genevieve West. New York: HarperCollins, 2020.

—–. Their Eyes Were Watching God: A Novel. University of Illinois Press, 1978.

—–. Folklore, Memoirs, and Other Writings: Mules and Men, Tell My Horse, Dust Tracks on a Road, Selected Articles. New York: Library of America, 1995.

—–. I Love Myself When I Am Laughing … and Then Again When I Am Looking Mean and Impressive: A Zora Neale Hurston Reader. Edited by Alice Walker and Mary H. Washington. New York: Feminist Press, 2020.

Their Eyes Were Watching God In Translation

Hughes, Langston. The Best Short Stories by Negro Writers: An Anthology from 1899 to the Present. Boston: Little, Brown and Company, 1967.

Crabtree, Claire. “The Confluence of Folklore, Feminism and Black Self-Determination in Zora Neale Hurston’s ‘Their Eyes Were Watching God.’” The Southern Literary Journal 17.2 (1985): 54–66.