Afrofuturism — Africans have been writing science fiction since around the 1920s. Some of the newer voices in Afrofuturism are N.K. Jemisin ,  Nnedi Okorafor, Lesley Nneka Arimah, and Deji Bryce Olukoton.

These authors’ titles include:

Your library has print and ebooks about Afrofuturism, and there’s even a Fall 2018 class entitled Philosophy of Afrofuturism, taught by Professor Lebron.

Movies — Even though you saw Black Panther more than once (like I did), you may have missed The Hub’s report about Professor N.D.B. Connolly’s article in the Hollywood Reporter:

“But dreams of a place like Wakanda began sometime around 1512 in the Caribbean mountains and forested hills above the mines and fields of Spain’s colony, Santo Domingo. Then and there, Africans in the Americas first broke away from slavery to form their own societies with indigenous island people. …In villages, town and cities, too, beyond the 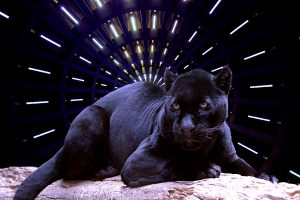 reach of slave-catchers in the eventual United States, black people carved out spaces and hoped-for futures of their own. Slavery and variations of colonialism, in the U.S. and abroad, forced linguistically and culturally disparate people, again and again, to understand themselves as “black,” as a race. …From Colombia to Canada to, later, coastal Liberia, a black homeland became the stuff of dreams.”

Harlan Ellison (aged 84) left us; an irascible genius (remember the episode of Babylon 5 in which he voices a computer so incredibly annoying that the security guy shoots it? Harlan wasn’t acting.) Don’t miss the latest biography about him, and the library also has some books, movies, and stories by and about him.

Finally: let us have a moment of silence for the immortal Ursula Le Guin, who left us in January at the age of 88.

She wrote in many kinds of  forms — books, novellas, short stories, poems. She disliked being pigeonholed into any genre, including science fiction; she also loathed the television version of The Wizard of Earthsea, and wrote an article entitled A Whitewashed Earthsea: how the Syfy channel wrecked my books.  NEWS: A documentary about Le Guin, which took 10 years to make, will be shown in the U.S. this Fall.