As Spring Fair gets under way, here’s a look back at the origins of the annual event. The first Spring Fair took place April 21-23, 1972, an entirely student-run festival. From the earliest days, it has been organized and run by the undergraduate student body, with cooperation from campus offices providing electricity, water, and security. It still serves as a means for inviting the community to the campus for food, crafts, and children’s activities.

For the first few years, the formal title of the event was 3400 On Stage, signifying that the university was holding an open house for all to enjoy. The 1972 publicity poster includes this invitation: “The Student Council invites the Baltimore

community to join us for a parade, concerts, plays, arts and crafts exhibitions and sales, sports events, science exhibitions, and a wealth of entertainment opportunities.”

In its early years, Spring Fair took its place beside the many community/ethnic festivals that were held around Baltimore every year. While most of those festivals have since disbanded or moved away (for a variety of reasons), Spring Fair has taken place each year without fail and, weather permitting, always draws a crowd. On some occasions, the weather has not cooperated – one year it snowed on the opening Friday, but in some years it seems as if the weather picked up on the theme and carried it forward; in 1985, the theme was “A Touch of the Tropics,” and the weather for all three days was sunny and 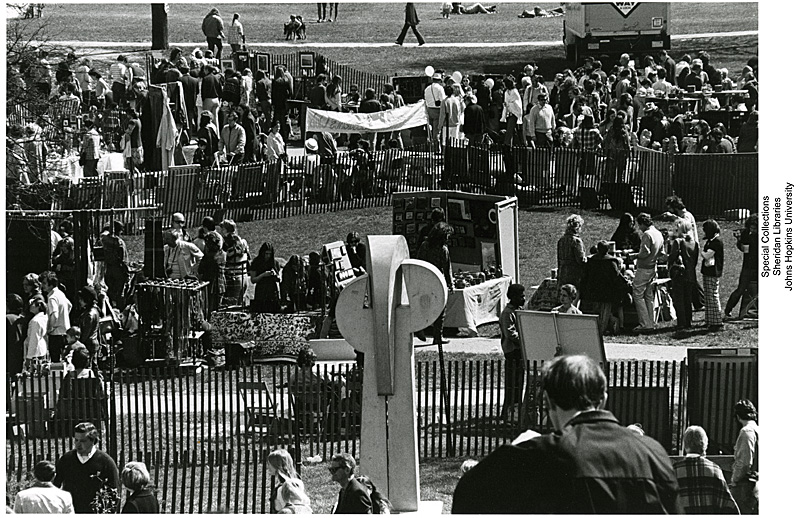 While the size of the fair has waxed and waned over the years, the purpose has remained the same. In the earliest years, the fair took place on the upper and lower quads, with children’s rides on the freshman quad. Beer vendors were distributed throughout the venue, rather than being confined to the “Beer Garden.” The need to ensure that only those of legal age could get to the beer led the organizers to create a single, gated area for beer sales.

When the brick sidewalks (and underground 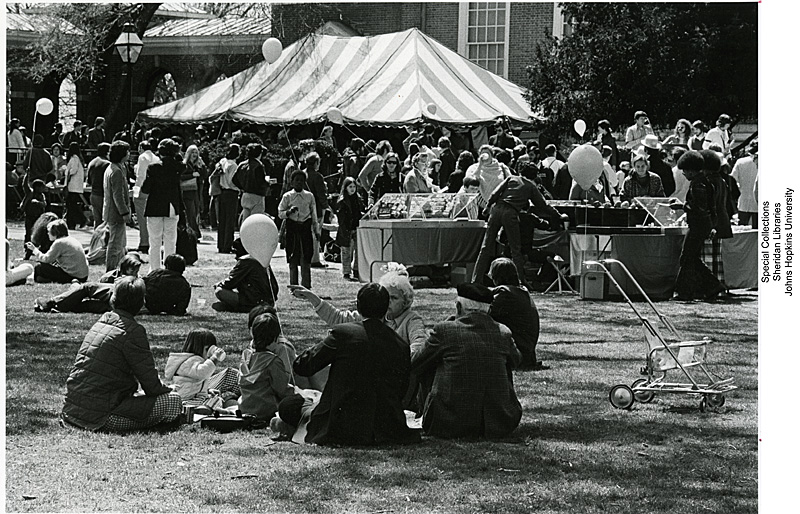 irrigation pipes) were laid in 2000, tents could no longer be pitched or vehicles driven on the quads due to the danger of hitting or crushing pipes, so the Fair moved to an area known as Garland Field. Garland Field was where the Decker Quad is now located (when that area contained a surface parking lot). In recent years, the food vendors have been placed on the Freshman Quad, with crafts on the upper quad.

So, enjoy the food, crafts, entertainment, and these retro photographs, taken at the first event in 1972.