Not Just Christmas and Hanukkah

Certainly, Christmas and Hanukkah are not the only well known holidays taking place in December. The month has been a time for celebration throughout history, as far back as the origins of Buddhism and the ancient Roman Empire.

Gautama, the originator of Buddhism. Celebrations vary but can include additional meditation and performing kind acts for others. Saturnalia, celebrated between December 17th and 23rd, is an ancient Roman holiday honoring the god Saturn. Celebrations would include elaborate feasts where slaves would be treated as masters, and gifts would be exchanged (in a manner not unlike modern Christmas celebrations).

Many celebrations around the world mark the winter solstice. Yalda in Iran celebrates the longest night of the year with family gatherings and sharing of food, especially the last of the summer fruits including pomegranates, watermelons and a variety of dried fruits and nuts. In China, the Dongzhi Festival commemorates the beginning of longer days with, among other traditions, family parties featuring glutenous rice balls or dumplings. 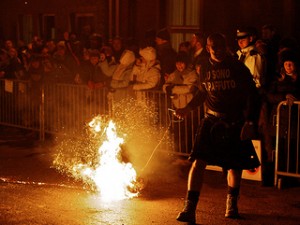 A bit darker, merry old England had a celebration known as Modraniht, taking place on what is now Christmas Eve. This was a ceremony evidenced by Bede at which Anglo-Saxon pagans would offer up a human sacrifice. To brighten up the end of the year, why not celebrate Hogmanay, the Scottish new year’s festival, taking place from New Year’s Eve through to the following evening or even January 2nd by singing Auld Lang Syne and swinging a fireball!

No matter how you celebrate December, enjoy it safely with those you care for, eat, drink, and be merry!