Every December, the Homewood Museum is decorated by the Homeland Garden Club “in the spirit of” Christmas at the turn of the 19th century. Arrangements of magnolia leaves, evergreen boughs, and holly decorate tables, window sills, and fireplace mantles. People would decorate their window panes with boxwood sprigs; and mistletoe was hung around the house. The phrase “in the spirit of” is used for two reasons. First, colorful flowers such as roses and carnations as used by the garden club would not have been available, and poinsettias were not introduced into the country until 1828. Secondly Homewood, a summer house, was shuttered up every winter, and owners Charles Carroll Jr. and Harriet Chew Carroll would be in their Baltimore townhome. In all likelihood they would have celebrated Christmas in an English/Southern fashion, attending parties and dances, though little is known as to how the family actually celebrated the holiday. 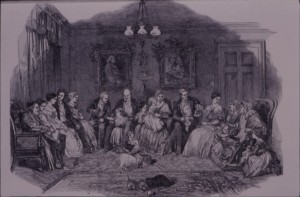 During the Federal Period (1789 -1830), Christmas was not universally kept. In the book Christmas in America, Penne Restad quotes Elizabeth Drinker who divided Philadelphians into three categories. “There were Quakers, who make no more account of it than another day, those who were religious, and the rest who spend it in riot and dissipation.” In many places, especially large cities, Christmas was a rowdy affair complete with wassailers and mummers who would visit and enter the homes of the wealthy to extract drink and money. Other activities included card playing, horse racing, nine-pins, and cock fighting. There was little gift giving, and when it was done it was for the children who were given Christmas boxes that would hold small gifts. If adults did exchange presents, it was often a potted plant or perhaps a gift book. 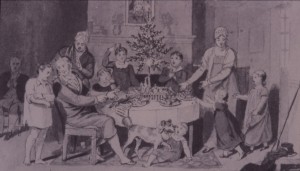 In the South, from Baltimore to Georgia, Christmas celebrations were more similar than they were in the Northern states. On Christmas Day, stores, and banks were closed. The harvests were in, animals were slaughtered for meat, and the beer and wine was ready to drink. There would be a yule log burning and lots of special foods to eat. Throughout the South, the shooting of guns at dawn announced Christmas Day. Some owners allowed their slaves to fire guns or use explosives to announce the day. At plantations and in Southern cities, there were parties, dinners, and dances to celebrate the season.

In addition, the celebration of Twelfth Night was popular most often in Virginia, Maryland, Delaware, and Pennsylvania. The Carrolls observed the day; in 1812 Louisa Carroll wrote in her copy book that the family had attended a Twelfth Night party. For many couples, it was the opportune time to marry, one famous couple being George and Martha Washington. 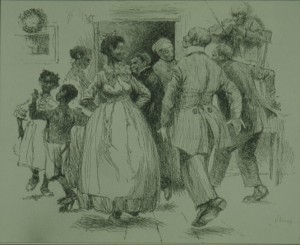 Slave owners varied in how they allowed their slaves to celebrate Christmas — from no celebration to the giving of wine, food, and time to prepare and enjoy their own festivities which included music and dancing. Gifts to slaves varied from small items to money. At Hampton Mansion, the Ridgleys gave slave children Christmas gifts which Eliza Ridgley recorded from 1832 -1850. To see the names of slave children and their gifts, scroll to page eleven of this PDF.

As times changed so did Christmas celebrations, but that is material for another blog post.