To Be a Black Writer: Chester B. Himes 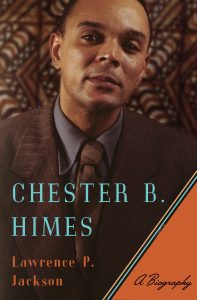 This guest post by Lawrence Jackson, Bloomberg Distinguished Professor of History and English, from his forthcoming biography of Chester Himes, previews the talk he will give on “Chester Himes and Life Writing,” on Wednesday, February 22 at 5:15 pm in the Macksey Room in the Brody Learning Commons.

Please visit our display of books from Professor Jackson’s collection in the window of the Winston Tabb Research Center, from February 16 through 28, in celebration of Black History Month.

In the spring of 1934 a young prisoner in Ohio’s maximum security penitentiary sat in a raw dormitory near an open latrine with a typewriter purchased from his gambling winnings. For three years, he had plunked away at short stories, one after another, dozens of them, mailing them out to newspapers in Chicago and Atlanta. Slowly he had mastered his craft while reading everything that the prison trustee had in the cart, from glossy magazines and detective stories, to Omar Khayyám and the latest by John O’Hara. Five years into his sentence, the twenty-four-year-old had known some minor literary successes, but in that year he would have some major ones. Although it wasn’t unheard of for an Ohio convict to achieve literary fame—O. Henry had walked the same yard; there was a difference. Chester Himes was black.

If race has reasserted its powerful relevance in the twenty-first century, in the early 1930s it had fully evolved into what the sociologist and writer W. E. B. Du Bois forecast in 1903 as “the problem of the Twentieth Century . . . the problem of the color line.” Up to 1934 there had been one black professional writer of regular national reach, the short-lived poet and novelist Paul Laurence Dunbar, who was best known for poetry in black “dialect,” what he himself was prone to dismiss as a “jingle in a broken tongue.” Others had tried and abandoned the job, moving on to steadier work. For most people whose parents or grandparents had reached adulthood as chattel slaves, it was thought improvident and foolhardy, if not genuinely odd, to pursue a career exclusively as a professional writer of fiction.

This was certainly true for Chester Himes. At the beginning, he ignored, denied, erased, or felt ashamed of much of what is understood today as racial ancestry or racial identity. He knew mainly that blackness had helped him pull a twenty-year-sentence for an armed robbery, a punishment he received at nineteen after he threw himself on the mercy of the court and confessed. A broken back was the only reason he had the leisure to write in the segregated prison and, unlike the other black convicts, wasn’t shoveling coal all day, everyday.

But to look at Chester Himes in 1934 was not, however, to be overwhelmed by something that mattered little to him. Light-skinned and slightly built, he exuded boyish, almost feminine charm. He had chipped teeth and several prominent scars, the main one on his chin, but they were the result of an accident, not street fights. For all of his life he would strive to appear tougher than what he felt inside, and writing helped him steel himself emotionally. He often compared the literary life to prizefighting and he accepted the discipline of training, punishment, and rejection, saying that “a fighter fights, and a writer writes.”

What he would accomplish in gray dungarees on the gray bunk surrounded by the clamor of unruly men suffering through the winter of their confinement would land him in a national magazine in 1934, repeatedly, alongside the best American writers, Ernest Hemingway and Langston Hughes, another young black man from Ohio attempting to make a career in writing stick. Within ten years, after an early parole, Chester Himes fulfilled all of his youthful promise, and published a fiery first novel with America’s largest press, Doubleday. Not even two years after that, and with arguably America’s best literary publisher, Knopf, he completed the book that would define his career, Lonely Crusade. But although he was acclaimed—“if he is not the greatest writer of fiction among contemporary American Negroes, there is none greater”—by the American impresario of modern art Carl Van Vechten, Himes fled the United States as soon as he could in 1953, returning in contrite humiliation for ten months in 1955, then happily abandoning America forever. In France, Chester Himes became a writer of international renown and shaped the attitudes of the next generation. He did it by living in an unbending style and pioneering black stories in a new genre: detective fiction.

Himes was driven to expose racial injustice, especially its subliminal and libidinal dimensions, and all of his work was that of a bold man struggling to survive by the writer’s discipline. His candid, revealing books shamed other writers and always repulsed and offended parts of his audience. Early on, his publishers considered him unique “for sheer intensity of feeling, for conveying utter frustration, the heart-breaking effect of constant defeat, and fear that can be dissolved only by violence.” But he insisted on taking his fight not simply to the most obvious sources of racial cruelty in American society, but to the doorstep of progressive liberals congratulating themselves for their altruism and kindness. He specialized in biting the hand that fed him, and he earned that reputation by accusing the presses that acquired him of perfidy. His first book, If He Hollers Let Him Go, made one of his editors at Doubleday remark that he “nauseated her,” which led Himes to develop a critique, which he made over and over, that the company sabotaged and cheated him. Doubleday’s editor in chief once responded testily, “We are not accustomed to having our word questioned the way you question it in that letter, Chester.” The editor would be joined by virtually everyone who ever published Chester Himes. Chester worked both sides of that street. He was the rare black writer to earn official condemnation from the NAACP.

Chester Himes soldiered on, writing books with a vulnerable honesty that left him wounded when the works floundered, typically on account of the claim that the author was too bitter, too graphic, and ignoring the progress in U.S. race relations after the 1954 Brown decision. He became, midway through his career, a scapegoat, the black writer unwilling to accept that the United States had become a blameless, functioning multiracial democracy. He was outcast for his blunt unwillingness to herald a Pollyannish future of healthy racial integration and economic justice. History has borne out some of his vinegary judgments.

In an America that was enjoying Amos ’n’ Andy, Himes wrote about black men lusting after white women, crippling skin-color prejudice, and the difficulty of combat against the power of corporate industrialists. Himes might have been considered a prophet if he had not begun a career in the era when Richard Wright was the recognized black writer exploring the arc of race relations, Willard Motley the best-selling author who had completely eschewed the race problem, and Ralph Ellison the shining artist-intellectual who transcended race and wrote because he loved his craft.

Although Chester wrote about Harlem and black workers struggling to get ahead, he was reared in the Deep South and Cleveland, the middle-class child of college teachers. He was the first twentieth century black American to walk the path of petty criminal and convict turned dynamic writer that would later make celebrities out of Malcolm X, Claude Brown, Eldridge Cleaver, Robert Beck, Nathan McCall, and several others. Himes’s early novels—If He Hollers Let Him Go (1945), Lonely Crusade (1947), The Third Generation (1953), and The Primitive (1955)—revealed a fundamentally racist American society less inclined to lynch blacks but preferring to dismantle them psychologically. In his French detective series starring Gravedigger Jones and Coffin Ed Johnson, he reversed gear, discarding the exposure of corruption and ethical hypocrisy and instead exaggerating the gross carnival created by slavery and segregation. Himes resolved the pain and indignation of his life by revealing the humor in it and by acknowledging the absurdity of western humanity and the inextricability of black people from any vision of America. His vernacular tales gained wide appeal and were turned into films. The generation who became writers after the assassination of Malcolm X, proudly calling themselves “black,” defining their identities in the storm of left-wing politics and black nationalist aesthetics, considered him their forebear. Their respect and admiration was unsurprising. During his lifetime, Chester Himes published seventeen novels, a book combining a major playscript along with several short stories, and a two-volume autobiography: he left a decisive archive and a legacy that endures.