Of Moles and Dreams and Napoleon’s Sinister Hand of Fate! 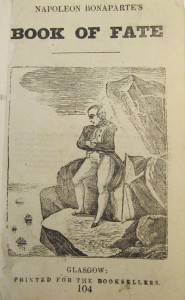 Have you ever, whilst undergoing a pique of ennui, wondered what Napoleon would have to say about your fate, or, while gazing at your reflection in a mirror, crying at the ravages of time, thought, “is this mole to blame for my life choices?” Solutions, fortunately, can be found for such sorrows in the chapbook collection at the George Peabody Library!

What’s a chapbook? Well, chapbooks are small booklets, roughly 24 pages in length, that were cheaply mass-produced (the paper made to use them is often referred to as bum-fodder!) and sold by traveling chapmen (no, not those kinds of chaps!) to non-urban communities. Dating back to the 16th century, chapbooks are a fascinating example of ephemeral literature, revealing to us the diverse reading interests of common people, as well as the shared reading habits of rural communities. The collection housed at the Peabody Library mostly contains Scottish chapbooks produced in the early 19th century, and the subjects involve everything from tips on managing a household to fairy tales to erotica!

So, what bum-fodder shall we explore today? How about works on fortune-telling and dream analysis, a rather popular genre for chapbooks. Let’s discover how chapbooks can improve our lives or throw us into Anne Shirley’s depths of despair by revealing everything that will be wrong with every decision we ever make.

Napoleon’s Book of Fate, a harrowing look at what your life shall become straight from the glittering isle of Elba, offers little solace. Is a loved one in jail? Too bad, for according to Napoleon’s wretched book, “the prisoner dies and is regretted by his friends.” Thinking about tying the knot? Well, think again. Perhaps bitter by how things turned out with Josephine, Napoleon, the emperor of cynicism, hath declared through his tome, “your partner will be fond of liquor and will debase himself thereby.”

Maybe we can find solace in our dreams. Oh, Golden Dreamer, save us from Napoleon’s visions of booze and debasement! It seems that if you are a man who dreams of oysters, “it denotes that he will marry a real virgin who will be very fond of him, and bring him many children,” and yet if he dream of an oven, it proves “that your sweetheart is of a roving disposition, little likely to make you happy.” Real virgin indeed!

Let’s move away from dreams and the unknown to that which is discernible. Our moles. Surely, they shall not lead us astray! According to The Spaewife, “a mole on either cheek signifies that the person shall never rise above mediocrity” and one “on the outside corner of either eye denotes the person to be of a steady, sober, and sedate disposition, but will be liable to a violent death.” Yep, probably by the debased husband Napoleon tried to warn us about. Mother Bunch’s Golden Fortune-Teller, however, is quite concerned with women and their les grains de beauté, and notes that if a woman has a mole on her forehead, she is “a slut” and “treacherous, consents to evil and murder.” But what about the knees? Surely, a mole on a woman’s knee shall not lead to a life of treachery: “If a woman has a mole on the right knee, she will be honest and virtuous; if on the left, she will have many children” because clearly one contradicts the other.

Too many mixed messages! Esteemed Mother Bridget, help us find the beauty of the world! Mother Bridget, a bon vivant cave dweller, non-stop pipe-smoker, and animal hoarder reveals all in The True Fortune or Universal Book of Fate. Though illiterate, she nonetheless knew how to write in hieroglyphs, which the compiler of this chapbook was knowledgeable enough to translate. But wait, what’s this — a note to the reader?

The foregoing pages are published principally to show the superstitions which engrossed the mind of the population of Scotland during a past age, and which are happily disappearing before the progress of an enlightened civilization. It is hoped, therefore, that the reader will not attach the slightest importance to the solutions of the dreams as rendered above, as dreams are generally the result of a disordered stomach, or an excited imagination.

You mean I have resigned myself to a life of mediocrity based solely on my mole placement for naught? Alackaday!