Have you ever felt pressure to follow a career path favored by your parents, rather than studying what you really enjoy? Ira Remsen did both – but not at the same time. Born February 10, 1846, in New York City, of Dutch and Huguenot ancestry, Remsen was educated in public schools. He then attended the College of Physicians and Surgeons, where he received the Doctor of Medicine in 1867.

Although briefly a practicing physician, he studied medicine only to please his parents. After satisfying this “obligation,” Remsen left for Munich to pursue his real interest: chemistry. He spent a year in Munich and then transferred to Göttingen, where he studied under the prominent chemist Rudolph Fittig and earned his doctorate in 1870. He then followed Fittig to Tübingen, where he was an assistant for two years. 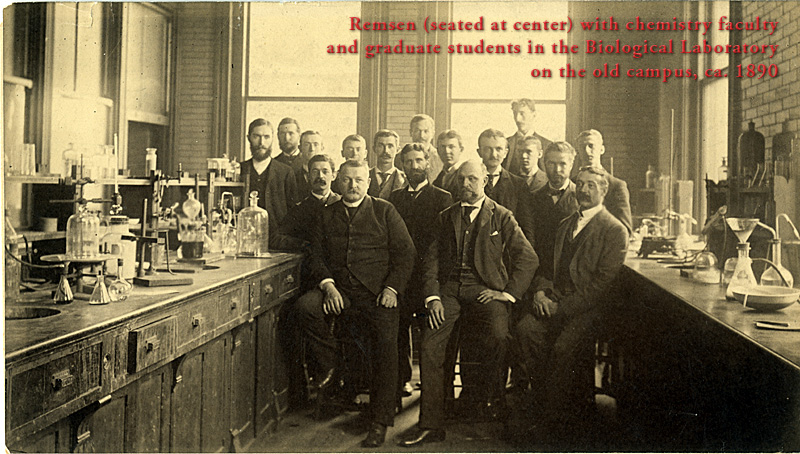 Returning to the United States, he became professor of chemistry and physics at Williams College. He found Williams unsympathetic to scientific research, so he concentrated on teaching. He wrote Theoretical Chemistry, in which he reduced fundamental principles to a form simple enough for beginning students to understand. The book received immediate recognition, but, perhaps more important, it brought its author to the attention of Daniel Coit Gilman in 1876, who was searching for a candidate to occupy the chemistry chair.

Although just 30 years old, Remsen had made a reputation for himself, both as a researcher and as a teacher, despite the environment at Williams College. He jumped at the chance to equip and direct his own laboratory, and soon his lab became a center for chemical research, attracting graduate students who went on to become outstanding figures. His talent for teaching was such that it was said of him, “nobody ever understood the beginner better than Remsen.” In 1879 he founded the American Chemical Journal, which he edited for 35 years, and he contributed a number of textbooks that remained standards for years. 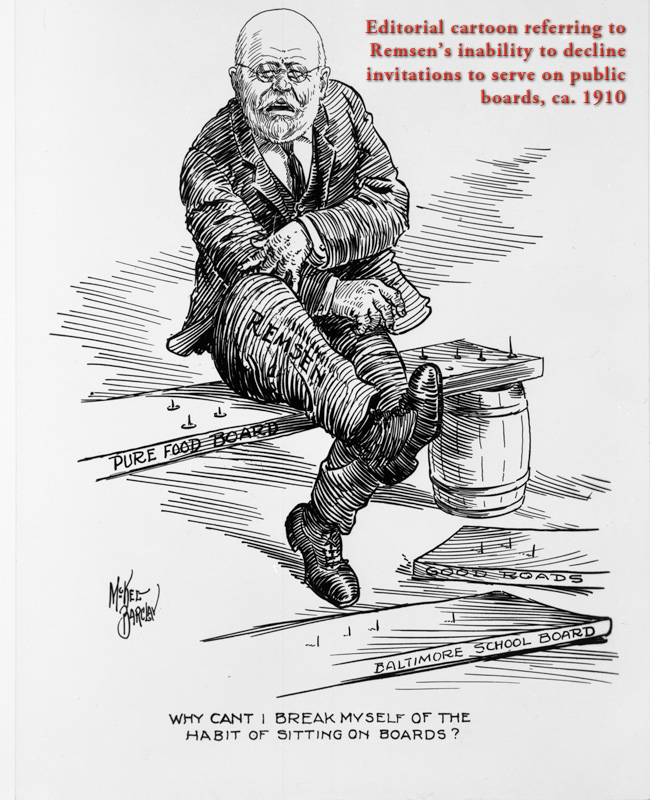 While working with postdoctoral colleague Constantine Fahlberg in 1878, they discovered a substance that became the artificial sweetener saccharin. Remsen had little interest in practical applications, preferring research for the sake of learning, but Fahlberg saw commercial potential and wasted no time in obtaining a patent on saccharin. Remsen did not object, but he became angry years later when Fahlberg tried to alter the account of the discovery. Fahlberg first omitted mention of Remsen as a participant in the research, then tried to make it appear that he, not Remsen, had been the senior investigator.

When Gilman retired from the presidency in 1901, after 25 years, the trustees turned to Ira Remsen to lead the university. He proved an adroit administrator, continuing Gilman’s policy of judicious expansion. The undergraduate course was lengthened from three to four years in 1906, and a fund-raising drive allowed building to begin on the new Homewood campus. Remsen also chaired a national referee board on the safety and control of food products.

Ill health forced Remsen to resign from the presidency in 1912, but he recovered sufficiently to rejoin the professional world, serving as a consultant to industry. He died on March 4, 1927. Upon his death, the trustees named the recently completed chemistry building at Homewood in his honor and interred his ashes behind a plaque in the west stairwell.