The Advent of Paperback Books 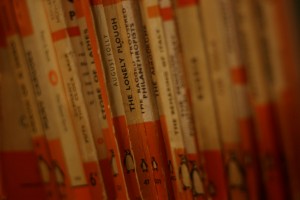 Once upon a time in the United States, there were no paperbacks as we know them today. Books by and large were sold in bookshops or in sections of large department stores. People bought hard-cover books or borrowed them from public libraries or lending libraries that rented best sellers. In fact, many people could not afford to buy hard-cover books or lived in rural areas where they were not sold. Instead Americans read magazines, dime novels, and pulp fiction, and paper-covered books that were larger than paperbacks. There had been an attempt in the U.S. to publish reprints in paperback format, but it was not successful.

The British were the first to create a successful line of paperbacks. Allen Lane, the head of Bodley Head Publishers, was upset when he could not find anything that he wanted to read at a train station. It was then he thought of publishing good fiction and non-fiction in paperback. Undeterred by many in the company who swore such an effort would never work, he and his brother worked to create Penguin books. They picked ten titles for the launch of this new adventure; three of the ten authors were Dorothy Sayers, Ernest Hemingway, and Agatha Christie.  The first Penguin paperback book was published July 30, 1935, and sold for about 10 cents. The doubters were wrong. The titles sold out and quickly had to be reprinted. Penguin Books went on to become a great success. 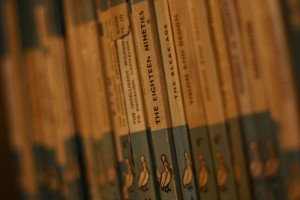 Paperback reprints came a few years later to the United States. Publishers were convinced that the masses would not buy books, and that the people who did would not buy cheap books. Either way, they would lose money, but Mr. Robert deGraff had an opposite opinion. He created Pocket Books — books that fit into a man’s pocket or a woman’s purse. In June 1939, he published ten reprints in editions of 10,000 and released them only in New York City to test the market. The top three titles sold in New York City were Wuthering Heights, Lost Horizon, and Enough Rope. After an enthusiastic reception in the city, the books were distributed nation wide. With the advent and success of Pocket Books, Americans could buy a copy of a good book in a variety of locations for the low price of 25 cents. And buy they did.