In the Alumni Memorial Residences on the Homewood Campus, there is a dorm house named for Jesse Lazear, who was described upon his death as “a martyr in the noblest of causes.” While Walter Reed gets credit for solving the mystery of how yellow fever and malaria are transmitted – and he deserves credit – Jesse Lazear was also heavily involved in this research, so heavily involved, in fact, that he lost his life in the cause of medical research.

Jesse William Lazear was born in Baltimore in 1866. He earned his bachelor’s degree at Johns Hopkins University in 1889, followed by an MD from Columbia in 1892. Returning to Hopkins after further study in Europe, he was appointed bacteriologist in the School of Medicine. In February 1900 he was appointed assistant surgeon with the US Army and ordered to Cuba. The Spanish-American War had recently concluded, bringing independence from Spain to Cuba, and troops were still stationed on the island.

During the war, many more died from yellow fever and malaria than from battle wounds, and the Army was determined to find out what caused these diseases. The prevailing opinion held that bacteria were the cause, spread through contact with clothing and bed linen used by patients. A few researchers theorized that mosquitoes were the real culprit, but most scientists believed in the bacteria theory. While the Army had a vested interest in conquering these diseases, they were not just a problem in tropical areas. Cities along the Gulf and Atlantic coasts were affected, including Baltimore and as far north as Philadelphia and New York. 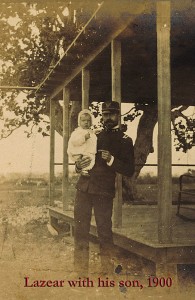 Lazear, working under Dr. Walter Reed, set out to test the bacteria theory. While working at Hopkins, Lazear had become interested in this question, and had familiarized himself with the research of Cuban scientist Carlos Juan Finlay, a leading proponent of the “mosquito theory.” Intensive research soon disproved bacteria as the cause of yellow fever and malaria, so Lazear quickly shifted to the mosquito theory. Picking up on the research of Finlay and Sir Ronald Ross, Lazear conducted a series of experiments proving that certain types of mosquitoes transmitted a virus that caused yellow fever and malaria. Next began the work to develop a vaccine.

The official story is that Lazear became accidentally infected with yellow fever while working on a vaccine. According to some of Reed’s writings, however, a journal kept by Lazear (which disappeared after Reed’s own untimely death in 1902) indicated he may have deliberately allowed himself to be bitten by a mosquito from his laboratory. Whether accidental or deliberate, Lazear contracted yellow fever. He wrote to his wife on September 8, 1900, that he believed he was on the right track, and he may have already been infected. On September 25, 1900, he died, leaving a widow, a one-year-old son, an infant daughter, and a promising future.