Are you a fan of anime or manga? Do you know who Solid Snake is, and why he opposes FOXHOUND? Have you participated in Cosplay? Or even Larping? If these terms are familiar to you, you may well be a fan of the annual Otakon Convention, held at Baltimore’s Convention Center since 1999. This gathering is a high-energy, vividly-costumed, three-day gala that is loads of fun, adventure, and industry insight. 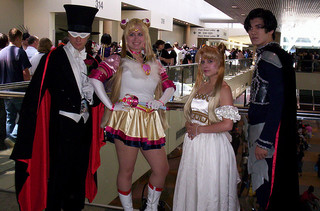 Since its humble debut with 350 unique memberships in 1994 at the Days Inn in State College, PA, Otakon has grown steadily each year; memberships have averaged over 26,000 after 2008, and topped thirty thousand last year! Turnstile attendance in 2012 was estimated at 96,500. Membership with Otakon is unique: when guests pay for a yearly membership, they also become part of the organization; members have valued input into future convention formats, workshops, and guests. This year, the confab even has its own video game, funded since last year through Kickstarter!

As the biggest event in the Baltimore Convention Center’s yearly calendar, Otakon also brings in healthy dollars for the Baltimore area; Baltimore Business Journal estimated that patrons brought in over $15.3 million in revenue, booking 4,575 hotel rooms, in 2010.

If you’re not already versed in the culture, but are interested, there are video design courses here at JHU for you, through the Computer Science Department. There are also books for you at MSE: Harry J. Brown’s 2008 book, “Video Games and Education”, shows how video gaming has revamped thinking about video games’ influence on cognition, politics, the psychology of learning, and how we teach, learn, and create. In Proquest, through Safari Books Online, we have this, a guide to anime production.

Also, a bit of the East Asian pop world has come to our campus through JohnCon, an anime convention held in the past at Levering Hall, where a weekend of role-playing games and workshops provided fun for all attendees.

Next year, Otakon goes to Vegas for the winter!